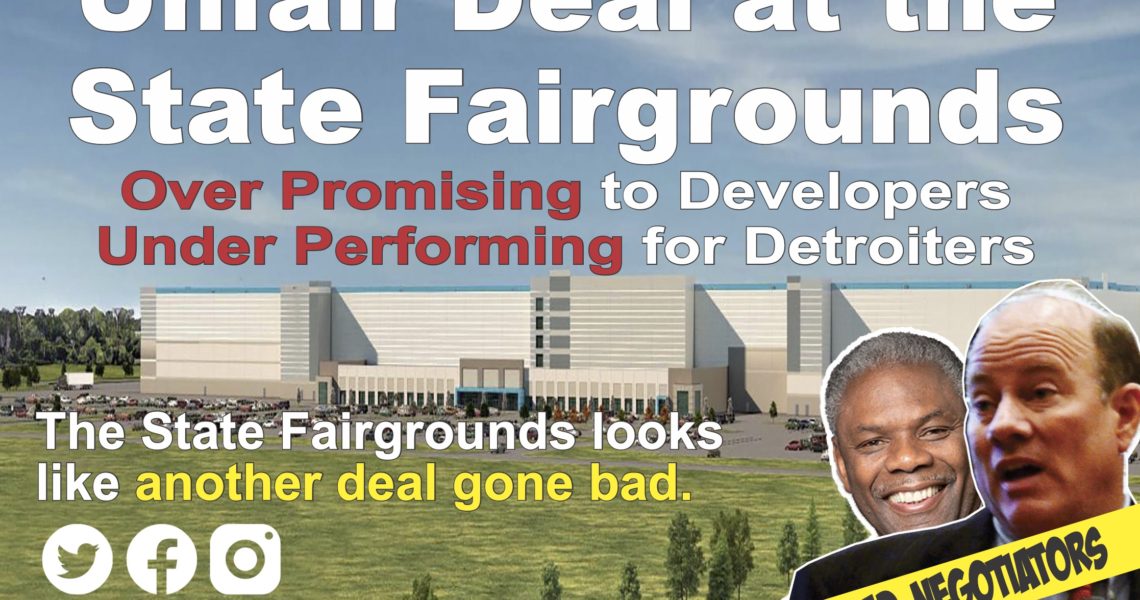 Unfair Deal at the State Fairgrounds

In 2018, the State of Michigan sold the State Fairgrounds to the City of Detroit. For nearly a decade members of the State Fairground Coalition have organized with community to create a sustainable development plan for the 142 acre area located along Woodward and Eight Mile Road previously known as the Michigan State Fairgrounds.
In August, Mayor Duggan announced plans for the sale of the land to a private developer Hillwood/Sterling Group with a proposed development of an Amazon Warehouse Center. The State Fairground Coalition caught off guard by this announcement has reached out to the community the past month to share details about the proposed development deal. Although the deal does not offer tax abatements to the developer, many have questioned what seems to be a land give away given the size and strategic location of the site for a reported sales price of $9 million dollars. Further, the deal impacts six (6) DDOT bus routes and roughly 30,000 DDOT bus riders who weekly travel thru the present State Fairgrounds Transit Center, which according to details in the purchase agreement, will be relocated from its present site along Woodward to somewhere adjacent to the development. All of this done on a quick timeline with the goal of getting the deal done and passed by city council in the next several weeks.
The development calls for a change to the city’s master plan and will require rezoning of the land from recreational to light industrial.
Detroit People’s Platform believes the current process fails Detroiters in a number of ways even in the absence of the usual tax abatements.
We are calling on Detroiters to join with the State Fairgrounds Coalition and make your voices heard.
Attached is a letter submitted by the DPP Transit Justice team which raises several concerns about the disruption and relocation of the current transit center and potential disparate and adverse impacts on majority Black Detroit essential bus riders.

Thursday, September 17, 2020
Community Meeting
Discuss the development at the State Fairgrounds. Hosted by the City of Detroit Office of Sustainability

Thursday, September 24, 2020
City Planning Commission will hold two public hearings. The second hearing at 6pm will be on the decision to amend the city master plan.

At 6:00pm, the request of the Planning & Development Department to amend the Detroit Master Plan of Policies in the Neighborhood Cluster 1, State Fair Neighborhood area will be considered. The proposed amendment is to change the Future General Land Use designation of the former State Fairgrounds from PR (Regional Park) to IL (Light industrial). The change is being requested to allow for the sale of City-owned property and its redevelopment for commercial and/or industrial purposes. https://detroitmi.gov/events/city-planning-commission-meeting-33

Follow the updates on this project with the State Fairground Coalition