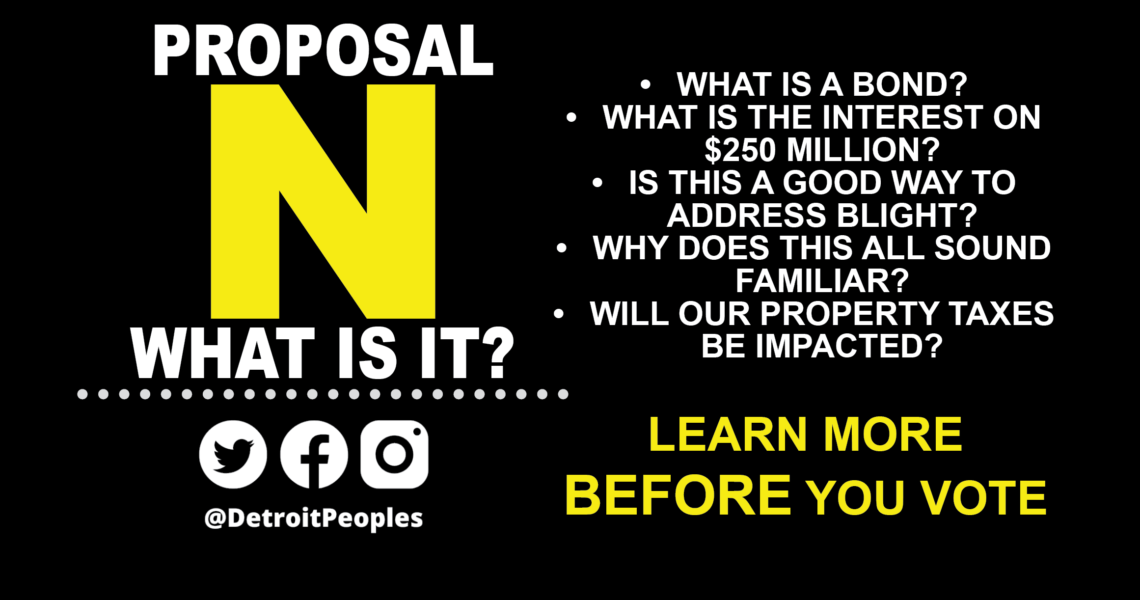 Proposal N: What is it?

• preservation and rehabilitation of vacant houses,

• demolition of abandoned houses that cannot be saved, and

Have Detroiters been advised which neighborhoods will be targeted for these demolition and rehabilitation projects?

A municipal bond is a way the city borrows money to pay for spending on city services and programs. Typically these investments are paid back through a millage—a tax on property owners in the city.

What is the interest on $250 Million?

Not only the face value of the bonds has to be paid back but interest costs as well. So this is called a $250 million bond—but with interest, Detroiters could end up paying as much as $420 million.

Is this a good plan to address blight?

The Mayor is making claims that the fund will be used to fix about 8,000 vacant homes and demolish another 8,000 that can’t be saved. The Mayor says Detroit based companies and companies that employ Detroiters will get “preference” in allocating the contracts for the demolition work. But there’s no legal provision to enforce these promises—they’re just “goals.”

In the previous demolition project when the city selected firms to contract for $148 million worth of federally funded demolition, African-American companies received only 16% of the contracts. Source: detroitnews.com/story/opinion/2020/07/20/Bankole-duggan-doesnt-have-detroits-trust-second-bond-proposal/5457958002/

Why does this all sound Familiar?

Earlier this year, Mayor Duggan’s administration tried to get these bond projects approved just by getting City Council to approve them. Council balked after about 500 Detroiters came to the public meeting to object to what was called the BLIGHT BOND.

Will our property taxes be impacted?