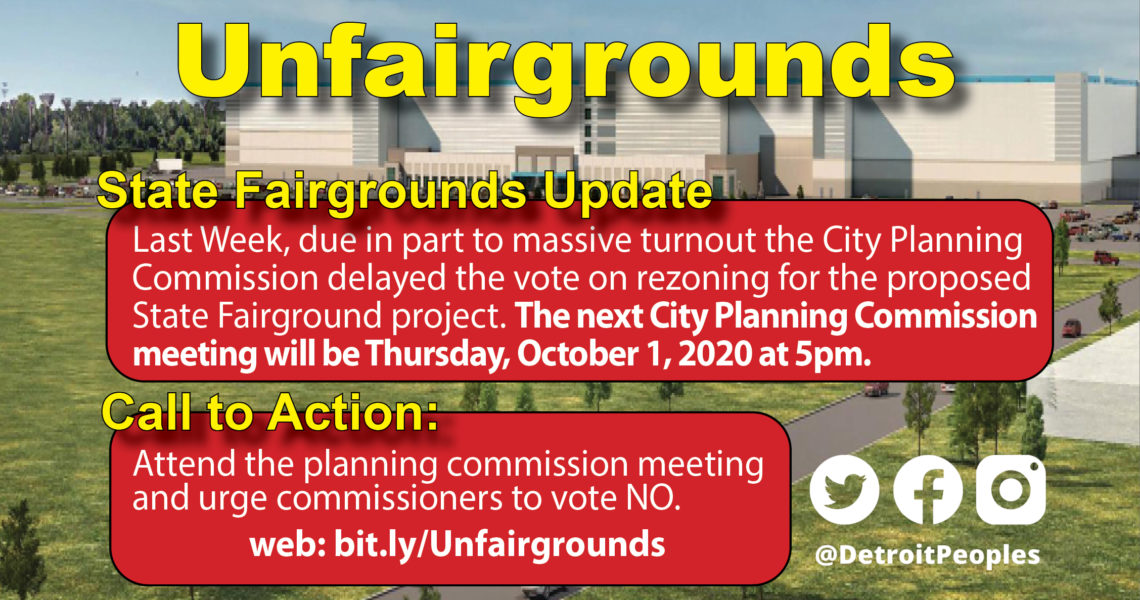 Last Thursday evening, September 24th 2020, nearly 200 Detroiters joined a marathon Detroit City Planning Commission zoom meeting to follow the State Fairgrounds development activity. The call went past midnight and the Commission delayed the vote. Thank you to everyone who supported this effort.

Detroit People’s Platform members and supporters
take action on this update and call from our community partners:

Please share this update from the Future of the Michigan State Fairgrounds
313-444-2560
http://mifairgroundsfuture.org/
https://www.facebook.com/FutureOfTheMichiganStateFairgrounds/

We congratulate the Detroit City Planning Commission for pushing back against the City administration’s pressure to convert the Fairgrounds from its current “Regional Park” designation to all “Light industrial.” We urge the Planning Commission to stand its ground! The next CPC meeting will be Thursday, October 1, 2020 at 5pm. (login details and agenda http://bit.ly/Unfairgrounds)

Mayor Duggan and his administration wants to pave the way for creating yet another polluted “Sacrifice zone” in Detroit in exchange for some of the worst back breaking jobs there are – Amazon warehouse jobs – and they’re not even promised to Detroiters!

Mayor Duggan brags that the City hasn’t granted the developers (who are fronting for Amazon) any tax giveaways and yet the City is pledged to pay for environmental remediation and building demolition – nearly $3 million in backdoor subsidies! *

Mayor Duggan is letting the developers and Amazon – one of the richest global corporations that avoids paying U.S. taxes -– off without a legally binding Community Benefits Agreement, as required by Detroit’s CBO ordinance.

Mayor Duggan hails that the developers are “gifting” Detroit with a new “$7 million transit center” to replace the current center on Woodward, but fails to report that it’s Amazon that’s demanding we literally spending money moving the current transit center so it can leverage public transit for free to drop workers off closer to its front door.

With so many flaws, it is no wonder the City wants to rush the “deal” through, thereby preventing the Planning Commission and the City Council from performing their due diligence.  We say we deserve better!

Planning commissioners should not approve changing the Master Plan unless, and until, the City of Detroit, Amazon, and the developers commit to a legally binding Community Benefits Agreement which includes: