Call for a Community Benefit Agreement for Racial and Economic Justice

Detroit Corporations that benefit from public investment and tax abatements have an opportunity to live into their public declarations against racism by endorsing a Community Benefit Agreement for Racial and Economic Justice. 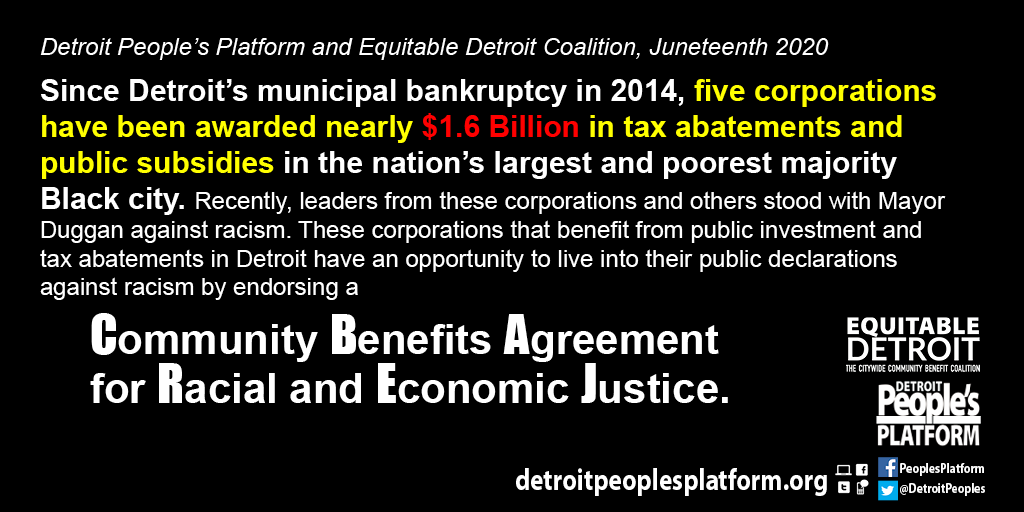 Recently, Mayor Mike Duggan hosted a press conference with leaders of nine of Detroit’s largest corporations. The press conference addressed both the local and national public outcry and demands for broader structural and systemic change brought on by the deaths of George Floyd, Ahmaud Arbery, and Breonna Taylor.

Each of the leaders stepped up to the mic, removed their mask and asserted their company’s commitment to addressing racial justice in generalized terms, many that emphasized counterproductive and played out concepts like diversity and inclusion.

At the Mayor’s press conference the companies agreed to four commitments:

Since the city’s municipal bankruptcy in 2014 these corporations have been awarded nearly $1.6 Billion in tax abatements and public subsidies in the nation’s largest and poorest majority Black city.

*Editor’s Note: These numbers are based on the most recently published press data.

Join the campaign for a Racial and Economic Justice Community Benefits Agreement with Detroit Corporations that receive tax incentives and public subsidies.