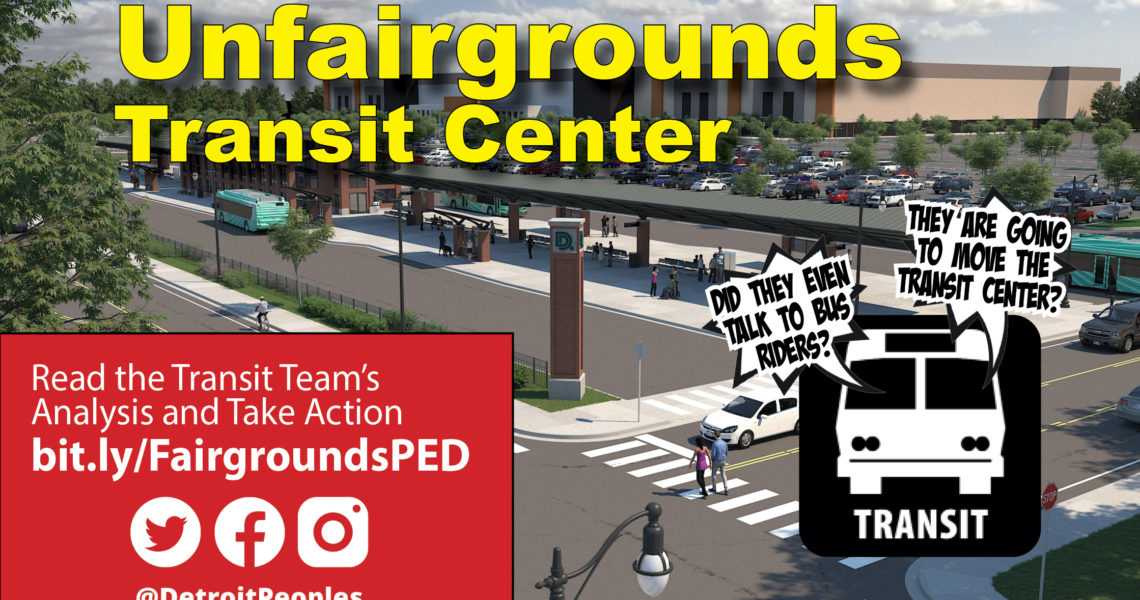 On October 1st, 2020, the City Planning Commission voted 7-1 to approve changes to the City of Detroit Master Plan to reclassify the State Fairgrounds from “regional park” to “light industrial.” This resolution will now go to City Council for consideration – in which they will have to approve rezoning and approve the sale of 147 acres of public land to private developers Sterling Group and Hillwood. This is related to an announcement from the administration that a proposed “North Transit Center” will be built near where Amazon may open in Detroit – despite not being named in the Purchase Agreement.  The Purchase Agreement lays out the process for selling the land, and only lists “tenant facility.” In short, the city is considering selling land for a possibility that Amazon will open a distribution center that will hire 1,200 people, with a flimsy promise of job workforce development in lieu of meeting the 51% Detroit hire required by Executive Order.

The Transit Justice Team participated in two City Planning Commission meetings, the first of which took place on September 24th – which lasted until 12:30am the next day. The mayor’s office recommended a vote that day and there was considerable push back from the public with nearly 100 public comments. The Commission voted to table the decision until their recent session that took place on Oct. 1st.

Under Title VI of the 1964 civil rights law, there are specific protections afforded to transit riders to protect against discriminatory practices and policies.  Our concerns are specific to the lack of a disparate impact analysis – a policy or practice that appears to be neutral but in fact has disproportionate affect on minority bus riders that lacks justification (such as moving a transit center without a public hearing) when an alternative can be considered in a public hearing. Also, a service equity impact analysis was not completed that considers access to work, social services, and essential destinations (doctor’s office, grocery store), in addition to ensuring that minority bus riders are not excluded from accessing destinations and municipalities based on their race. The Transit Justice Team raised the following concerns:

Now that the City Planning Commission voted to recommend amendments to the Master Plan, the City Council is now the last elected body that will vote to approve the rezoning of the area, amendments to the master plan, and approval of the purchase agreement. Also, there is a provision to provide shuttle service for Amazon in lieu of timely construction of the new transit center. This is evidence alone that the transit center is for the sole purpose of transporting Amazon workers at our collective expense for their private benefit.

support the ongoing operations of the Tenant Facility.” – Purchase Agreement between the City of Detroit and Sterling Group/Hillwood (the developers).