An open letter to the Fiat Chrysler Neighborhood Advisory Council

An open letter to the Fiat Chrysler Neighborhood Advisory Council

On Monday, December 7th the city will host the first annual report of the Fiat Chrysler (FCA) Community Benefit Agreement for the Jefferson Avenue Plant expansion. This annual meeting fulfills one of the requirements of the 2016 Detroit Community Benefit Ordinance (CBO).

As the Neighborhood Advisory Council (NAC) you will have an opportunity to both receive and respond to the report out on the progress made towards goals initially set forth in the community benefit agreement. The agreement was signed by all NAC members with the exception of Member Michelle Jackson.

The signing of the agreement culminated in FCA being awarded over $400 million in public subsidies – an extraction of public wealth in the nation’s largest majority Black city and one of the poorest.  As best we can figure out FCA has invested $8.8 million of its own money for a limited number of community benefits and a promise of 5K jobs.

Since the signing of the CBA on April 26th of last year, a seismic shift has occurred across the nation. There has been a renewed and energized Black Lives Matter Movement ignited by the killing of an unarmed Black man, George Floyd, by a white police officer. All of this occurring against the backdrop of a global pandemic.

COVID -19 has led to the premature death of thousands of Black Americans as a result of persistent and poor health outcomes rooted in racial health disparities.  Once again, the nation is forced to confront the system of white supremacy that reinforces structural and systemic racism at its core and victimizes Black Americans at every turn.

So much so has the nation’s conscience been punctured by this confluence, that on June 3rd, nine corporate leaders gathered in Detroit at the Coleman A. Young Municipal Center to state their renewed commitment to “Rejecting and eliminating all forms of bias, racism, sexism and violence within their communities and companies” among others. The corporates have vowed that business as usual is no longer acceptable.  Among those speaking into this commitment toward racial equity was Make Stewart, CEO of Fiat Chrysler.

We believe that FCA should be held accountable to the words of CEO Mark Stewart. We believe that you as NAC members must represent the voice of the impacted community, the precincts in the Beniteau and FCA impact area, that in 2016 voted for Proposal A, the citizen led ballot initiative calling for strong CBAs. We believe that you as NAC members have a moral obligation to CALL OUT for a revised CBA agreement. One that centers the priorities and needs of that majority Black community. Especially for the Beniteau residents who are facing life altering environmental and health impacts related to the plant expansion. A recent study released by Harvard University has identified the area residents on its heat map as particularly vulnerable to COVID infection.

We acknowledge that FCA, through their community partnerships and acts of corporate charity, divert attention from the injustices that are being perpetrated against long time Black residents on Beniteau.

We acknowledge that the corporate representatives expect you to be complicit in their racism and injustice. Their career success is fueled by their ability to deliver up Black and low-income communities with the least amount of resistance.

We acknowledge that those who stand and speak against injustice are typically labeled troublemakers. And that, in cruel irony, residents who call for equitable investment in community benefits are described as “shake down artist.”

We acknowledge the threat that is often leveled against Black residents, insisting we remain silent and accept injustice in exchange for jobs and organizational benefits, even when our public money is subsidizing the deal, the jobs never really materialize as promised and our organizations still struggle to survive.

We acknowledge that our elected officials have colluded with FCA while turning their backs on impacted residents, knowing full well that the funds allocated for home repair is woefully inadequate to begin with.  They could have demanded more from FCA up front – they did not.  We wish the administration and city council worked as hard for the interest of majority Black Detroit residents as they do for the interest of corporations and big business.

We acknowledge that FCA posted $1.4 billion dollar 3rd quarter net profits and therefore the corporation can do a better CBA deal with impacted residents. And most importantly,

We acknowledge that nowhere in the current CBA agreement does it state that the FCA corporation cannot enter into a revised agreement with the city or the residents – to address the resident priorities - it is a matter of choice. Since the project was announced residents have demanded reduced emissions, better environmental protections and more money to make their homes safe to live in.

Therefore, we call upon the NAC to exercise your power and voice in the annual meeting and Call Out for a new CBA deal.  In the words of our recently departed and courageous social justice warrior The Honorable John Lewis, at the annual meeting tonight “Make some good trouble!” 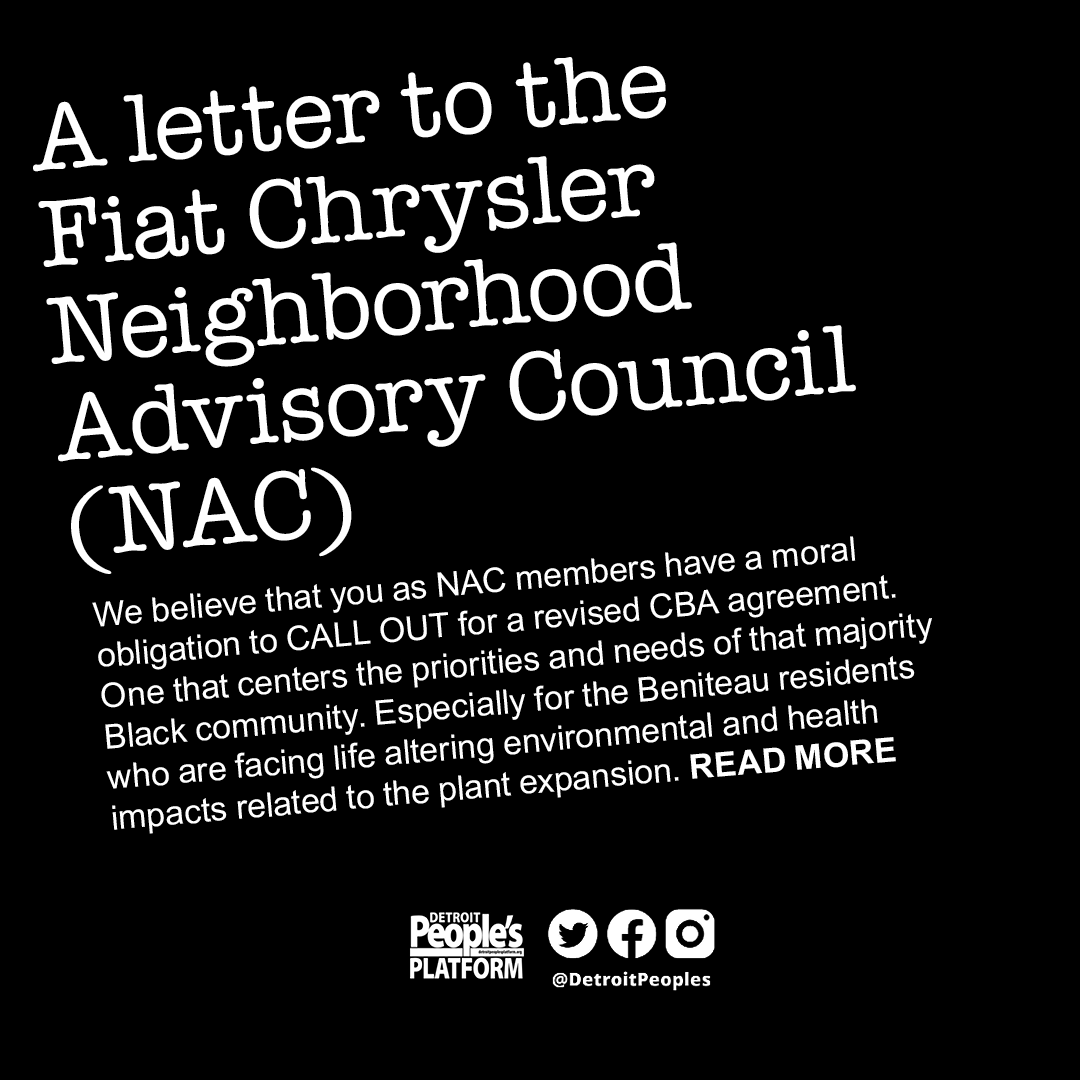