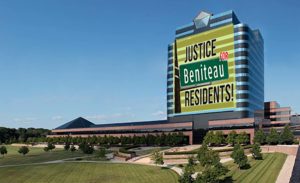 On Monday, September 20, 2021 the Michigan Department of Environment, Great Lakes and Energy (EGLE) filed a violation notice against FCA, now Stellantis, due to resident complaints about overwhelming odors. The new Jeep Grand Cherokee L went into production this summer and residents have reported an increase in odors and health issues since.

The Justice for Beniteau Residents group has led public education efforts and encouraged neighbors to call Michigan’s Pollution Emergency Alerting System (1-800-292-4706) whenever they smell something. Responding to calls from Beniteau, representatives from EGLE performed investigations on the street multiple times before filing the violation.

What does the Violation Mean?

The violation reads; “In ADQ staff’s professional judgment, the odors observed during each investigation were objectionable and of sufficient intensity, duration, and frequency to constitute a violation of Rule 901(b), and General Condition No. 6 of PTI 14-19a: an “UNREASONABLE INTERFERENCE WITH THE COMFORTABLE ENJOYMENT OF LIFE AND PROPERTY.” 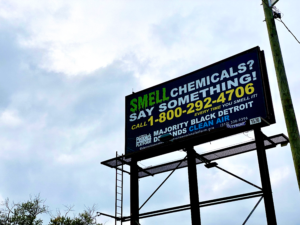 On October 11, 2021, The Detroit News and Free Press reported on Stellantis’ response to EGLE. Though their full response has not been analyzed as of printing, the press coverage cites Stellantis’ hiring a third-party investigator to research the odors and the creation of company complaint line.

No matter the result of their investigation, RESIDENTS AND ADVOCATES KNOW IT IS THE PROXIMITY OF HOMES AND FAMILIES TO A PAINT PLANT THAT IS THE ISSUE.  Many also strongly question the proposed ‘Company Hot Line’ to handle complaints. The concern is that this is a tactic to intercept complaints before they get to the state. There is low confidence and trust in Chrysler JEEP Stellantis.  Justice for Beniteau Residents continue to recommend everyone in the impact area “CALL THE STATE IF YOU SMELL PAINT!”  Michigan’s Pollution Emergency Alerting System (1-800-292-4706)

At the time of printing, we await EGLEs’ response to Stellantis’ post-violation plan.  We encourage EGLE to send Stellantis a strong message and that they not allow levels of exposure to continue while they try to ‘find the smell.’ The news reports that they will share the results of their independent investigation on January 9th, 2022. THAT IS THREE MORE MONTHS OF EXPOSURE FOR RESIDENTS ON BENITEAU AND THROUGHOUT THE IMPACT AREA!

During Detroit City Council’s Committee of the Whole meeting on Tuesday, October 5, 2021, Council Members were notified and informed about the three Air Quality Violation Orders filed by EGLE. It was apparent from the discussion that staff from Detroit’s Civil Rights, Inclusion and Opportunity (CRIO), The Detroit Health Dept., the Buildings, Safety Engineering and Environmental Departments (BSEED) and the City’s Law Department were inadequately informed about the violations. THE LINES OF COMMUNICATION HAVE FAILED WHEN IT COMES TO PUBLIC HEALTH AND SAFETY ISSUES. - Watch Meeting 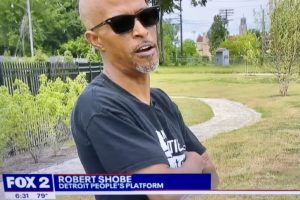 In response to this failure, brought to light by the Justice for Beniteau Residents’ complaints, Council Member Raquel Castaneda-Lopez took action. The District 6 Council Member moved through two environmental resolutions without objection. ONE OF THESE RESOLUTIONS WILL CALL FOR EGLE TO WORK ON A SUPPLEMENTAL ENVIRONMENTAL PROJECT (SEP) FOR RESIDENTS LIVING NEXT TO THE CHRYSLER, JEEP, STELLANTIS PLANT.

Why do these Violations Matter?

The overwhelming fumes cited in the violation are a call to action. While damaging pollutants can be undetectable and many factors influence individual sensitivity and tolerance, the fumes on Beniteau are often strong. The intensity of the odor and quick impact on the health of many residents could be connected to increases in particulate matter (PM) and volatile organic compounds (VOCs).

VOCs are gases that are emitted into the air from products or processes. Some are harmful by themselves. In addition, they can react with other gases and form other air pollutants. “Breathing VOCs can irritate the eyes, nose and throat, can cause difficulty breathing and nausea, and can damage the central nervous system as well as other organs. Not all VOCs have all these health effects, though many have several*“.  THE AREAS AROUND COMPLEX HAVE SOME OF THE HIGHEST ASTHMA HOSPITALIZATION RATES IN THE STATE AND NEARLY DOUBLE THE RATES OF OTHER AREAS OF THE CITY.*

“We are filing this request to make sure that, in addition to our complaints to EGLE being heard, we are also heard at the city level,” Beniteau resident Robert Shobe. “(Former Council Member) Spivey was supposed to represent us and our interest in this deal and now that he has resigned, we need to make sure that we are being heard and that the threats to our health and quality of life are being addressed.” - Follow the paper trail! 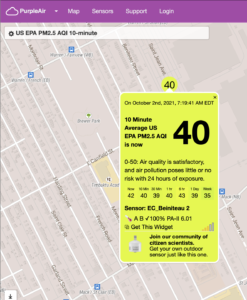 Partnering with the Ecology Center we’ve distributed Purple Air Monitors.  The monitors connect to an on-line map and app.  YOU CAN CHECK AIR QUALITY IN THE IMPACT AREA: purpleair.com/map

We stand in SOLIDARITY with Justice for Beniteau Residents!

Detroiters who live on Beniteau are uniquely impacted, living next to the Detroit Assembly Complex without buffers. Due to this they have been leading the fight and organizing with their neighbors since before the project was announced. Beniteau Residents have pushed back for wins that support and protect everyone in the impact area and Detroiters across the city: