The American Rescue Plan Act (ARPA) funds have been provided by the Federal government to address the COVID-19 pandemic recovery. In Detroit and across the nation, evictions and unjust foreclosures are a result of the pandemic burden faced by low-income households that are largely Black, Indigenous and People of Color. The city of Detroit received the 5th largest amount of federal ARPA funds, yet Detroiters stand to benefit the least in terms of sustainable housing relief. Throughout the Duggan administration, one of the ways much needed funds have been diverted is by spending it on demolitions.

In 2017 Detroit housing justice advocates and residents organized and WON the creation of Detroit’s Affordable Housing Trust Fund (HTF) passed through the City’ Council’s Inclusionary Zoning Ordinance.  The Housing Trust Fund is one of the only ways to address this crisis by providing truly affordable and accessible housing.

How the Housing Trust Fund Works in Detroit. Money for the Housing Trust Fund is made available in the annual Detroit city budget and includes 20% of the net profits of city owned commercial property sales. Developers who do not meet the requirements of the ordinance may also have to pay a fine into the fund.

Who Benefits from the Housing Trust Fund?  The HTF is intended to develop and preserve affordable housing in Detroit for Individuals and families who earn less than $35 thousand dollars a year – NOT high-income earners.

Recently the HTF helped to develop the following

Take action! Call City Council and the Mayor!
Tell them to Defund Demolitions and INCREASE FUNDING for the Housing Trust Fund that will produce MORE truly affordable and accessible housing for Detroiters.

During the past two years the administration has prioritized the expansion of industrial sites as a key economic growth model. Examples include the State Fairgrounds, Cadillac Plant, FCA/Stellantis and the recent AMC Headquarters development. For the most part, the developers of these sites are mandated to fix the environmental issues on the development property.  Unfortunately, residents who live in the impact area alongside these developments are left to deal with the negative health and environmental impacts that reduce their quality of life. A recent example of this situation is the poor air quality associated with the FCA/Stellantis plant expansion. Our local elected officials cannot simply say this is a responsibility for the State of Michigan.

Demolition funds should be re-allocated to the Public Health Fund to support the protection of Detroiters from historical, ongoing and future over pollution. The current administration has spend nearly a billion dollars on demolition without adequately responding to the housing crisis or the environmental injustice of deals like Stellantis. The state has fined Detroit $24,500 in the last eight months over environmental safety violations by contractors hired to demolish houses. Source: Axios

The particulate matter generated by demolition may represent a threat to the health of people living nearby, one of these being asthma. Latest state report on asthma in Detroit shows the disparities have grown in the last five years. In 2012 Detroit adults with asthma at 15.5% compared with Michigan’s 11%. Last year, 16.2% of Detroit adults had asthma, while the proportion statewide remained almost the same at 11.1%, making the disease 46% higher in the city than the rest of the state. Source: Detroit News

Call City Council and the Mayor to step in and provide some relief for residents. Funding should improve the quality of the air we breathe; protect our homes from damage, continue to educate residents and improve our neighborhood environment overall. 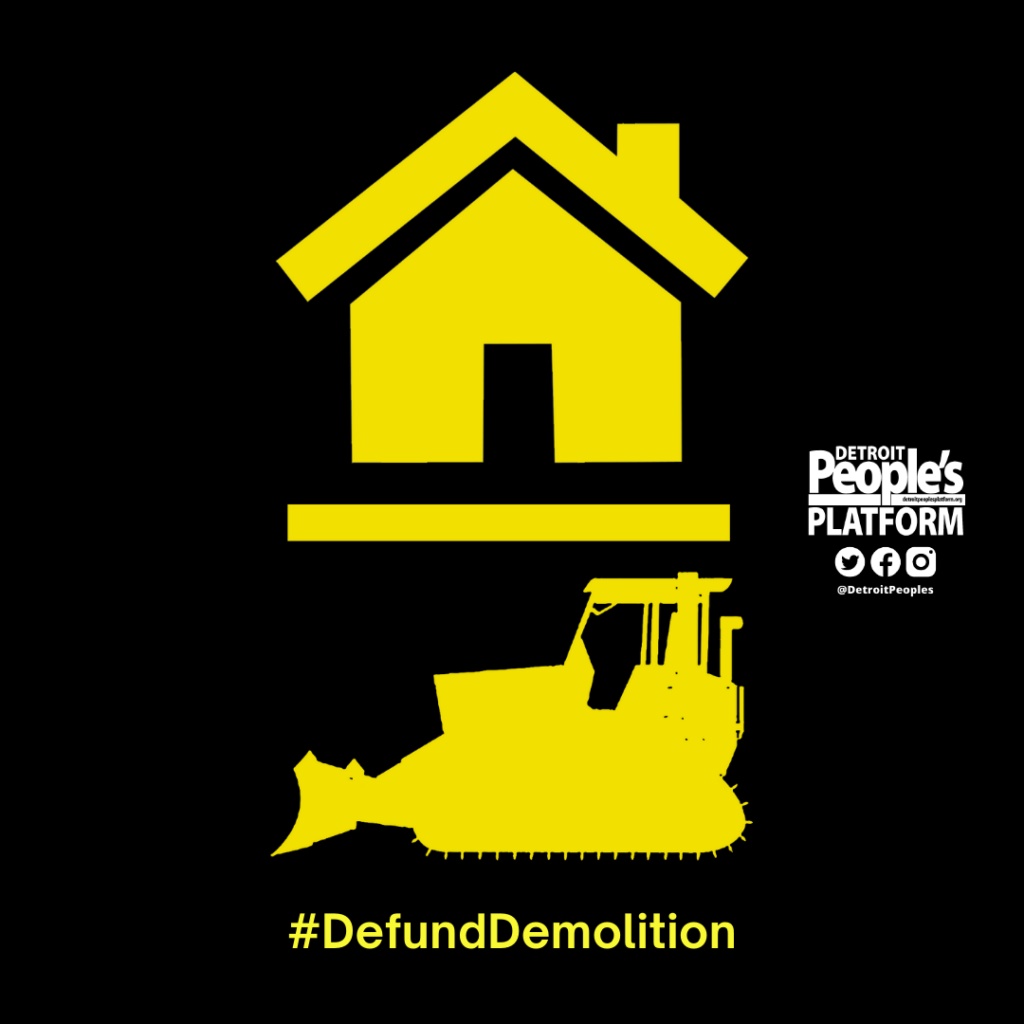