Read this article in the Detroit Metro Times.

For years, local advocates have warned that Detroit’s celebrated recovery and economic comeback was misguided concluding that the beneficiary of these economic gains were largely white and wealthier leaving the majority of Black Detroiters behind.  A recent report published by Detroit Future City (DFC); The State of Economic Equity in Detroit seems to bear this out.

The report cites that between 2010 and 2019 the median income of Whites in Detroit increased by 60% compared to the 8% increase in median income among African Americans - an astonishing 52% percent difference. We believe there is a stronger connection to be made between these outcomes and intentional policy decisions championed by our elected leaders over the past decade.

Policies that have called for the transfer of hundreds of millions of dollars in public tax abatements to corporations and developers have fallen short. Based on the data reflected in this report, the promise of jobs and economic mobility for Detroiters have failed to materialize. To the contrary, Black Detroiters tend to be over-represented in low wage, high turnover jobs in industries like hospitality, leisure, and entertainment. These are not the middle wage jobs characterized in the report that offer a path to middle class benefits like home ownership. It’s not surprising that Detroit is surpassed only by Cleveland as the city with the lowest percent of middle-income households in the nation.

As local advocates have predicted, it turns out the beneficiaries of these policies and promises are not majority Black Detroiters. Responding to the report, life-long Detroiter and founding member of Detroit People’s Platform Ron Turner, shared; “these findings are not surprising to me given the lack of economic opportunity I witness everyday across Detroit neighborhoods”

However, in the wake of this disturbing revelation, there is encouraging news. The report lands as Detroit contemplates a post-COVID economic recovery assisted by the nearly billion dollars of federal stimulus funding through the American Rescue Plan (ARP). Now, there is a real opportunity for Detroiters to demand investments that prioritize and addresses the needs of the left behind neighborhoods and residents in majority Black Detroit.

This needed change will require Detroiters demand bold and imaginative policy making from their public officials. We can begin by requiring that corporations and developers doing business in the city pay their fair share. We must demand that every job corporations and developers bring to the city be a quality job with family sustaining wages and benefits. Finally, we must prioritize public investments that improve the social infrastructure in high need neighborhoods.

Making the pivot towards a more equitable and just Detroit is a future worth fighting for. Detroiters pride themselves on having the grit and the know how to “get it done”.  Let’s live into that legacy where the vision for a racially and economically just Detroit becomes our new reality. 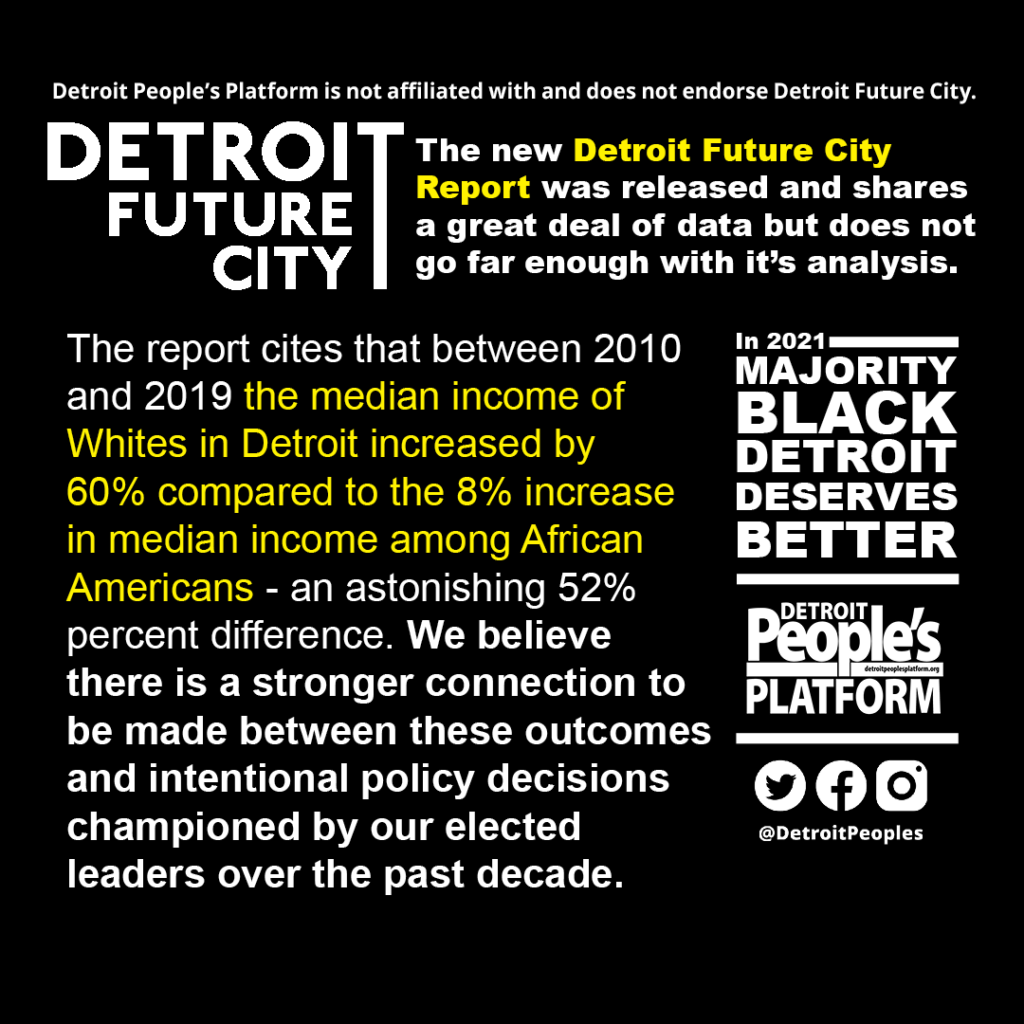