Last month, despite grassroots calls for Detroit City Council to vote down the Gilbert/Bedrock request for $60 Million in tax incentives for their luxury skyscraper hotel, the deal was delayed but approved with concessions.

Last week, both the Detroit MetroTimes and Crain's Detroit Business ran follow up stories on the deal. 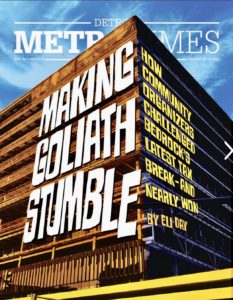 When Theo Pride, a community organizer with Detroit People’s Platform, got word that a proposed $60 million tax abatement for billionaire Dan Gilbert’s real estate firm Bedrock was being pulled from City Council’s consideration on June 28, he had two interlocking thoughts.

The first was satisfaction at the small victory a band of skeptical everyday Detroiters had achieved over the city’s most powerful corporate goliath.

“We were able to defeat a lot of the propaganda,” Pride tells Metro Times. “This thing was stopped because of community voices.”

The second was another dose of skepticism.

Organizers had seen city and corporate leaders outmaneuver the community with hand tricks and stalling tactics before.

“The powers that be see all of the political opposition from the community to this thing. And not only that — we’re organized, and we’re focused. So the other part of me thought this is a tactic to buy time to wear the community down,” he says, only to reintroduce “this thing in a different form so Gilbert can still get what he wants.”

Pride also points out that nearly having a majority of council members stand up to the “tax incentive-industrial complex is grounds to be optimistic that development and policy in general can look much different than it has in the past, that it can be community-centered, more equitable, and more just.”

Going head-to-head with Gilbert and his vast web of lobbyists and boosters was hard to imagine back in June, when Bedrock hit up the council for an extra $60 million tax break for the project, a mixed-use development that includes a mid-rise and skyscraper on the site of Detroit’s former J. L. Hudson Department Store. The real estate giant claims that the ten-year abatement is necessary to bring the two downtown buildings to life, which will feature a hotel, luxury condos, and commercial retail space.

But after several residents spoke out against another round of corporate handouts (Bedrock received $618 million worth of tax breaks for the project from the state in 2018), the council postponed the initial vote twice. On June 28, Bedrock withdrew its request, acknowledging that “it is clear more time is needed for this matter to work through the process.”

Organizers had caught Bedrock off guard, and the Goliath stumbled.

The basic argument for corporate handouts like Bedrock’s is that by cutting taxes on the rich, they’ll invest and innovate more. Once you do this, productivity will increase and the economy will grow, which benefits everyone. Bedrock’s basic logic is similar: feed us tax dollars and jobs and tax revenue will flow.

But it doesn’t hold up under scrutiny.

The research is clear on each of these points. First, investment and growth often thrive in high-tax environments. Second, the public sector has always been a vital driver of innovation, resulting in the development of technologies ranging from the internet to cell phones to drug manufacturing. Third, labor productivity, juiced by what’s often nauseatingly called “human capital development,” is a vital piece of economic growth that we could easily finance through higher taxation. Lastly, without altering the distribution of where all that new wealth goes, it will inevitably flow into the hands of the already rich. This is what’s happened over the last 50 years; worker productivity has steadily increased, while employers have frozen their wages. In Michigan and everywhere else, the gains have all gone to the wealthy few.

But it isn’t just that living standards have stood still for so many while the wealthiest have made a killing. Many poor and working-class people actually did worse over the last 40 years. While corporate welfare flowed generously, Republicans and Democrats dismantled spending on basic human needs like housing, education, health care, and food at every level, including in cities like Detroit. Wages and upward social mobility for ordinary people have flatlined. Life expectancy is slipping. Inequality is in the stars.

These were all choices. They were all avoidable.

The facts are clear here as well. A mountain of research shows that public welfare spending on ordinary people is far more effective at growing the economy and improving people’s well-being than the relentless stream of welfare that flows to corporate suites. That’s because corporate welfare only succeeds at making the rich richer. On creating wide prosperity, it is a pathetic failure compared to public spending.

As Deadline Detroit recently detailed, economists are deeply skeptical of Bedrock’s claim that the tax break will create new jobs and revenue for the city. Massive, taxpayer-supported private developments are notoriously bad at keeping promises. Instead of creating new jobs, they often draw existing ones away from nearby regions, draining the word “development” of any real meaning and at an enormous cost to taxpayers. And the supposed $71 million tax benefit during the project’s first decade depends on the creation “of 1,948 new, full-time jobs in Detroit, and not just hosting existing jobs that relocated from older city buildings,” the Detroit Free Press reports.

The problem, as Pride puts it, is that boosters for corporate handouts “naturalize” this bleak set of options as if “there is no alternative” and that we can’t possibly do things differently.

Hammer agrees. He points out that the U.S. approach to growth, which chases after shiny new buildings and corporate expansion at all costs, is “an aberration” internationally.

“We fetishize the idea that this actually works,” he says. But “Detroit is really ground zero for the failure of global capitalism” as a whole.

This failure can’t be laid at the doorstep of ordinary Detroiters, he stresses, but at the architects of a system that places corporate stock prices and market share above actual human lives.

You only need to look to the auto industry, which “took decades to respond to a changing global market” before running away to the suburbs, then the South, then Mexico, and then overseas in search of cheap labor and the ability to pollute and plunder poor communities as they pleased. And of course there’s the housing industry, which has turned Detroit into a majority renter city and thrown hundreds of thousands of people out of their homes.

All of this “should make us more skeptical of markets, not less,” Hammer adds.

You can extend that skepticism to political and corporate elites who sell us fantasies about tax breaks. “They invoke the same rituals and rites,” he says, and expect that miracles “will suddenly fall from heaven.”

As Pride puts it, “Development becomes a very hollow word to invoke the idea of prosperity.” But it’s done “in a way that improves a place without improving people’s lives,” he says. You can make an area more vibrant, for instance. “But did the people who used to live there benefit from this?” he says. “A lot of times development is occurring but people aren’t benefiting.”

This “hollow” form of development has very real human consequences in Detroit. A third of people here live in poverty, at least 11% of Black residents remain unemployed, and 48% of Detroit’s families don’t have access to enough food. And residents in some Detroit neighborhoods can expect to live 20 years less, on average, than residents 20 miles northwest in posh West Bloomfield ones, 67.8 years compared to 87.

“There is still a long way to go to carve out a truly progressive political space in our city government,” he says. The Bedrock vote may signal growing progressive power on city council, but DPP has also tracked “a total of $132 million in [tax breaks] over a span of 30 days” approved by city council.

Meanwhile, Councilman Scott Benson’s office is essentially on a propaganda run to reeducate voters on the miracles of tax breaks. He’s teamed up with the Detroit Economic Growth Corporation and Brownfield Redevelopment Authority for a series of community meetings where they give “a one-hour presentation on how tax breaks promote development, reduce blight and offset the cost of environmental cleanup on contaminated sites,” Bridge Detroit reports. At their first and only meeting so far, Detroit People’s Platform was in the room, offering details about the pitfalls of corporate giveaways that the glossy presentation never mentioned. 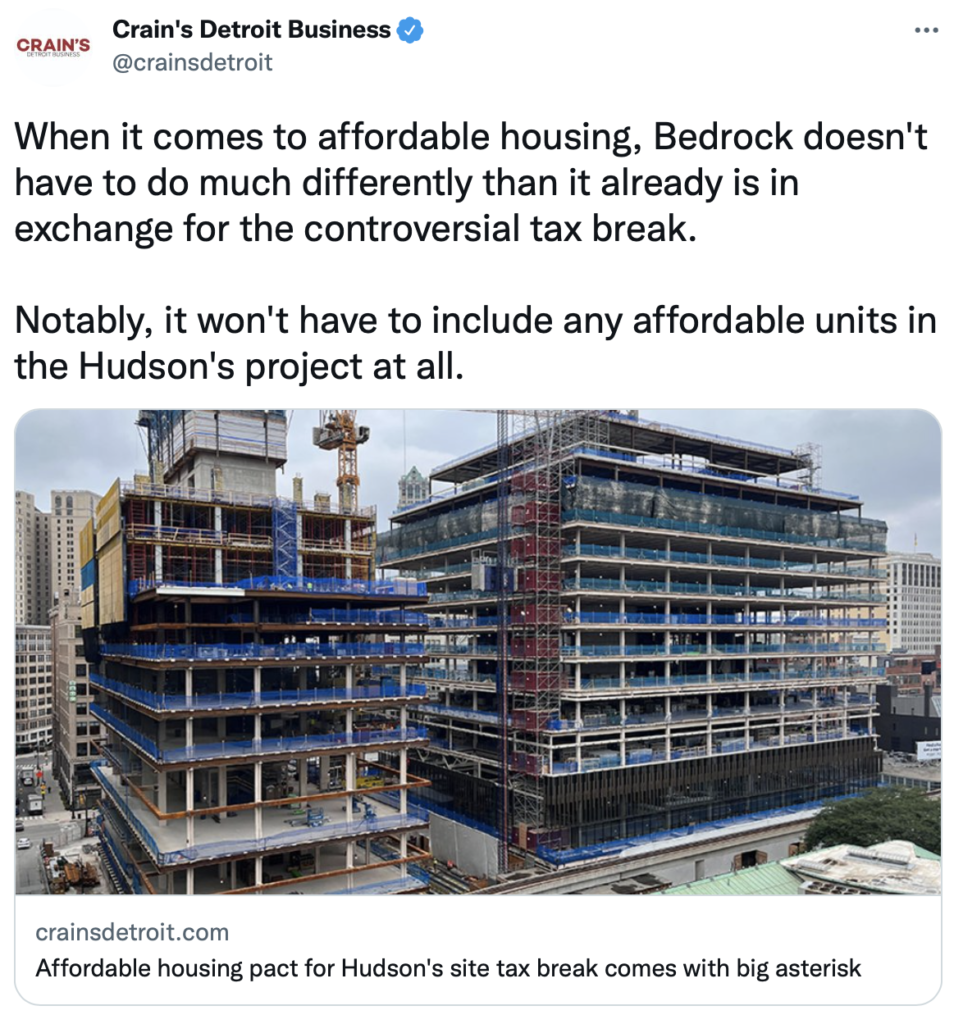 "Detroit City Council members who supported a $60 million tax break for billionaire developer Dan Gilbert's Hudson's site project last month made it a point to stress that stricter requirements for affordable housing would be part of the deal."

"But it turns out Gilbert's real estate company, Bedrock LLC, is almost entirely in compliance with those requirements already, according to a Crain's analysis."

"What that means is that, at least when it comes to affordable housing, Bedrock doesn't have to do much of anything differently than it currently is doing in exchange for the controversial 10-year tax break at the former J.L. Hudson's department store site development on Woodward Avenue. And notably, Bedrock won't have to include any affordable units in the Hudson's site project at all." (The full article is behind a firewall here)

These are some of the points that stood out from the full Crain's analysis: