Detroit’s FY 2021-22 budget approved by City Council does little to nothing to address the demands of Detroiter’s made clear during the Community Budget Priorities outreach initiative this past year.

This outreach is intended to give residents more input and voice in decision-making processes that impact their everyday lives and their communities. However, resident participation is meaningless if outreach does not lead to outcomes for the community.

Detroiters were in large concerned with improving their quality of life through heightened investments in public services and programs.

What did Detroiters get?
While the city made a few minor changes based on resident’s feedback, it failed to deliver on some of the most important issues mentioned. The biggest example is police reallocation. Despite calls to decrease police funding it was increased it by several million.

The only police budget changes came from City Council’s decision to reallocate $990k from the Police Cadet program. However, those dollars went to Civil Rights, Inclusion and Opportunity (CRIO), the City Council, and the office of Inspector General, not Transportation, Libraries, or Affordable Housing.

Another highly demanded budget item from community was to increase DDOT funding. Although the although funds were added to transit, half of it was to hire more officers to police bus riders. No extra money was dedicated to expanding bus routes, add bus stop benches and shelters, or improve services as residents called for.

The budget failed to address the community’s priority to better maintain public parks and city owned property. The 2022 budget did not include one cent for capital for facilities like parks and libraries. However. City Council did set aside $2 million for HVAC repairs at Detroit Main Library.

Our Final Analysis
In the final analysis, less than .5% of the initial budget proposed by the administration was changed.  The look and feel of this year’s community budgeting outreach was more performance than substance.

Caution!
In the coming months, more than $800 million in federal stimulus money is headed to the city of Detroit. Based on this recent history of how public official’s respond to community input, Detroiters cannot be caught up in the charade of community outreach, a task force or committee work. Alongside these efforts, Detroiters must organize power and demand that the investment of these public tax dollars result in real benefits and outcomes for themselves and the neighborhoods they live in. 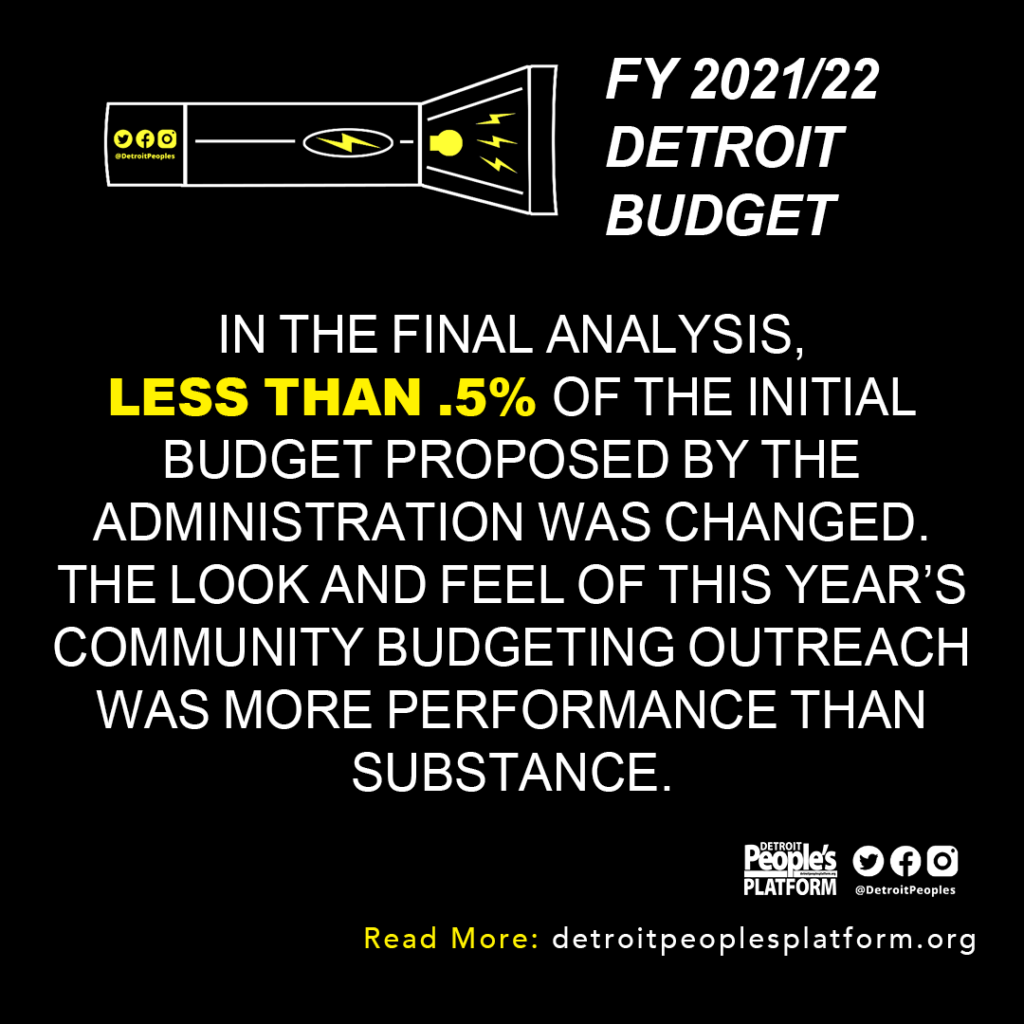