Principles for Corporations Negotiating Community Benefits with Residents of Detroit

Detroit is the largest Majority Black City in the country, with the intention of celebrating and preserving that distinction.  Historic residents have stayed when others left, but nevertheless  remain marginalized and mis-represented in democratic processes.  We are denied meaningful voice over the policies that impact our lives.

The name George Floyd has come to symbolize the cumulative effects of four-hundred years of racism in America.  The violence of police brutality is physical and structural.  Other aspects of racialized violence are also structural, as revealed by the health disparities of Covid-19.  The systematic disinvestment in cities like Detroit is yet another form of structural violence, as is the diversion of public resources to subsidize private economic development. During the past decade  corporations doing development in Detroit by our estimates have been awarded nearly $1.5 billion dollars in tax abatements (mostly concentrated in the downtown business district). And yet, Detroit remains one of the nation’s most impoverished cities.  It is obvious that majority Black Detroit is not benefitting from these public investments.

In this national moment, business as usual is no longer acceptable.  Existing processes are structurally flawed and fundamentally unfair. We need to adopt new practices to ensure more equitable outcomes. How corporations engage with Detroit residents is a good place to start to repair these long-standing injustices.

The Equitable Detroit Coalition calls on corporations receiving public subsidies and engaging in negotiations for Community Benefit Agreements (CBAs) to commit to the following principles:

Racial Equity is both a process and an outcome. 1) As a process, we apply racial equity when those most impacted by structural racial inequity are meaningfully involved in the creation and implementation of the institutional policies and practices that impact their lives.  2) As an outcome, we achieve racial equity when race no longer determines one’s socioeconomic outcomes (Center for Social Inclusion).

Corporate Commitments to Racial Equity as a Process

Racial equity is achieved when race no longer determines one’s socioeconomic conditions.  Corporations should commit to using Community Benefits Agreements to support quality developments in the neighborhoods they are subsidized to invest in so that these neighborhoods will look like the neighborhood that their executives go home to at the end of the day

A version of this document appears as a Commentary in Crains Business Detroit. as "Community Benefits are more than just a checkbox" by George Gaines and Peter Hammer.

George Gaines is part of the Equitable Detroit Citywide CBA Coalition. Peter Hammer is professor of law and director of the Damon Keith Center for Civil Rights at Wayne State University Law School.

George Gaines is a former Detroit city official and part of the Equitable Detroit Citywide CBA Coalition. Peter Hammer is professor of law and director of the Damon Keith Center for Civil Rights at Wayne State University Law School. 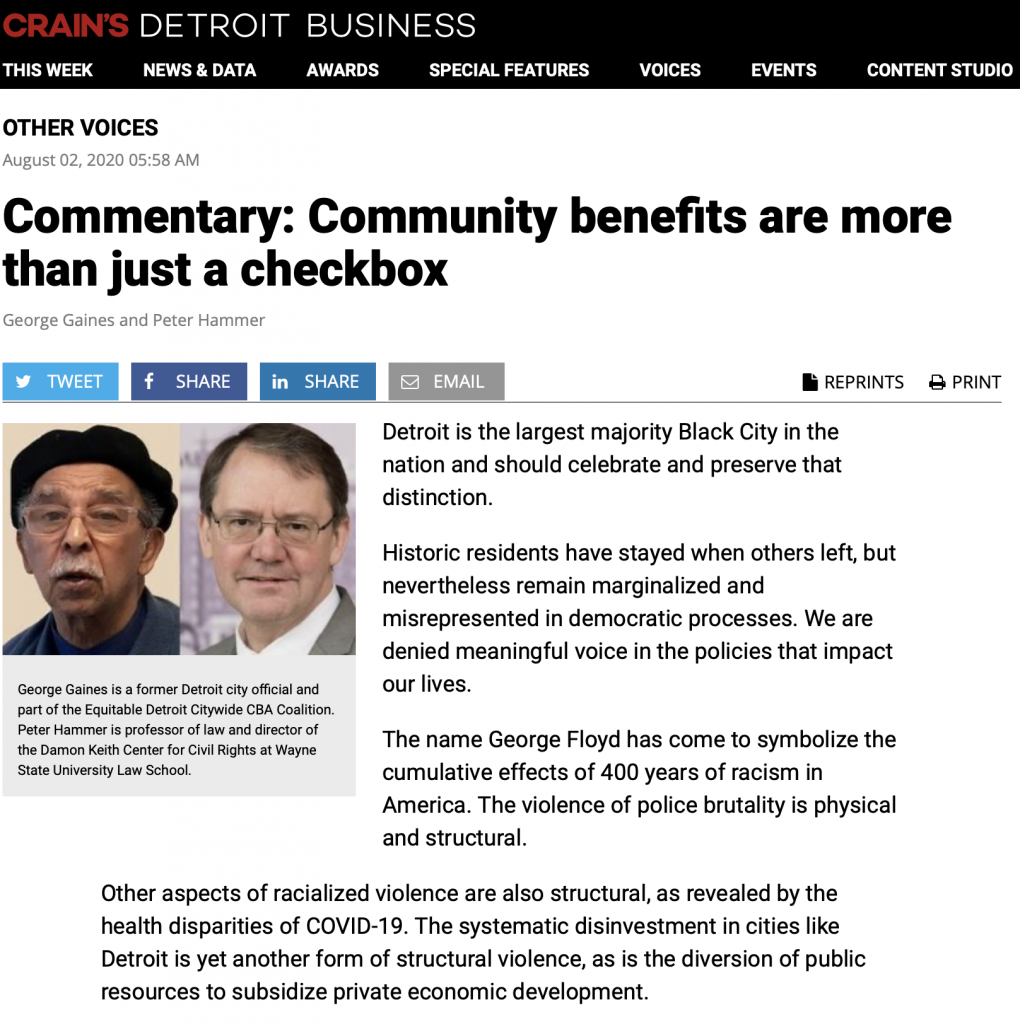