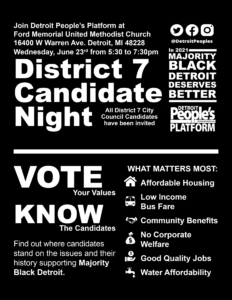 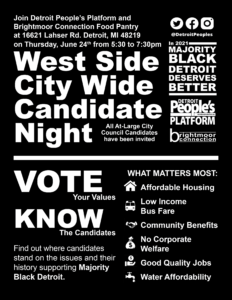 Know the Candidates
Vote your Values

In the early stages of the COVID-19 pandemic, Detroit was identified as a hot spot. Majority Black Detroiters experienced covid death and illness in higher rates than many other communities.  Covid also impacted Detroiters because even before the pandemic we had existing public health crisis, poor medical care and conditions rooted in historical structural and systemic racism.

More than 20,000 people have had their water shut off each year since 2014. The United Nations (UN) has stated that Detroit’s water shutoffs are contrary to Human Rights.

DDOT is the largest public transit system in the State with an average daily ridership of roughly 100,000 mostly of riders who depend on the bus as their primary means of transportation.  In a city that has valued private automobile ownership over reliable and quality bus services.

The city’s budget determines how money is spent and what it is spent on. In recent years Detroit City Council has approved the administrations budget with minimal changes and without implementing many requests made by community.

Thousands of Detroiters have been displaced from their homes and neighborhoods as a result of unjust tax foreclosures and evictions. At the same time the average Detroiter pays more than half their income in rent, among the highest in the nation.  When policy makers speak about affordable housing as a part of development, they typically are for households with higher incomes than the average Detroiter.

The current Community Benefit Ordinance needs amendment. It does not include a legally binding agreement between community and developers for large scale development projects that include public investment. Politicians hold the power to appoint Neighborhood Advisory Committee (NAC) members who speak with developers on behalf of community.  In many CBO development projects developers have failed to honor the recommendations presented by community representatives.

The Detroit economic development strategy often allows developers to capture property taxes within a certain district that may be designated for schools or libraries.  These tax captures or TIFS as they are known, divert funds from the city budget and our neighborhoods suffer as a result.

After you vote, STAY ENGAGED! 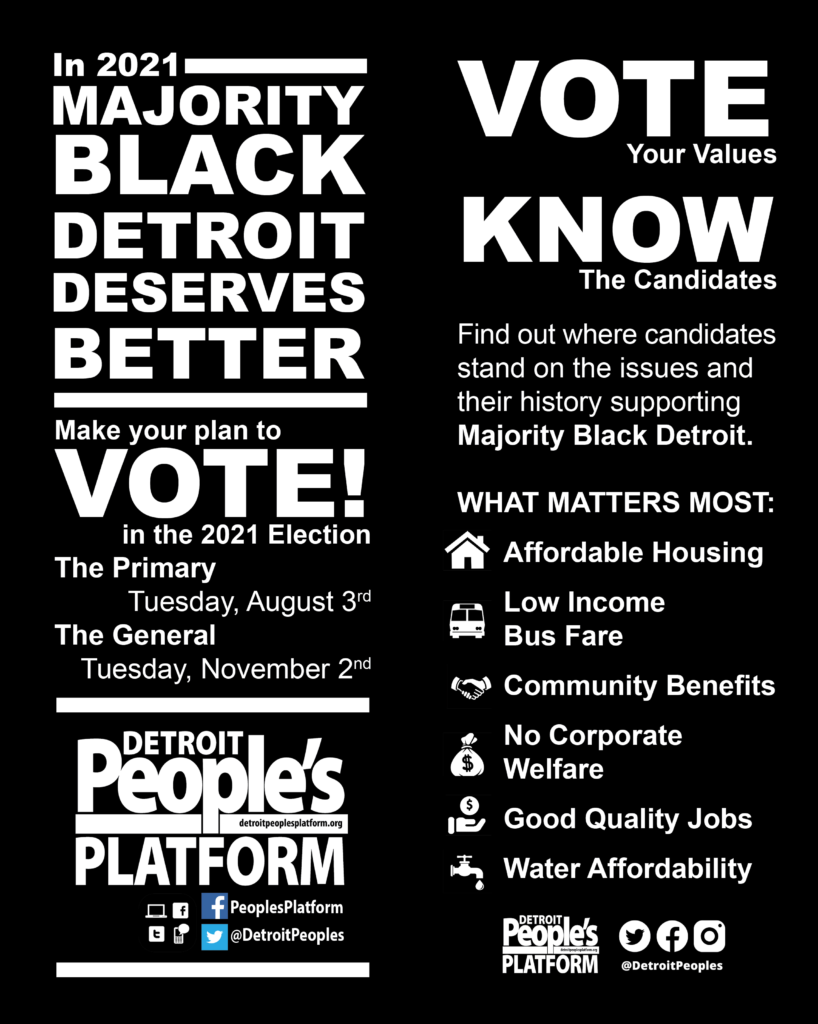