Clarifying Literacy Rates in Detroit – A long-debunked and problematic study

It is time we put an end to this racist and erroneous notion that nearly 50% of Detroiters cannot read - it is FALSE, debunked, and doesn't help in any policy discussion or debate. 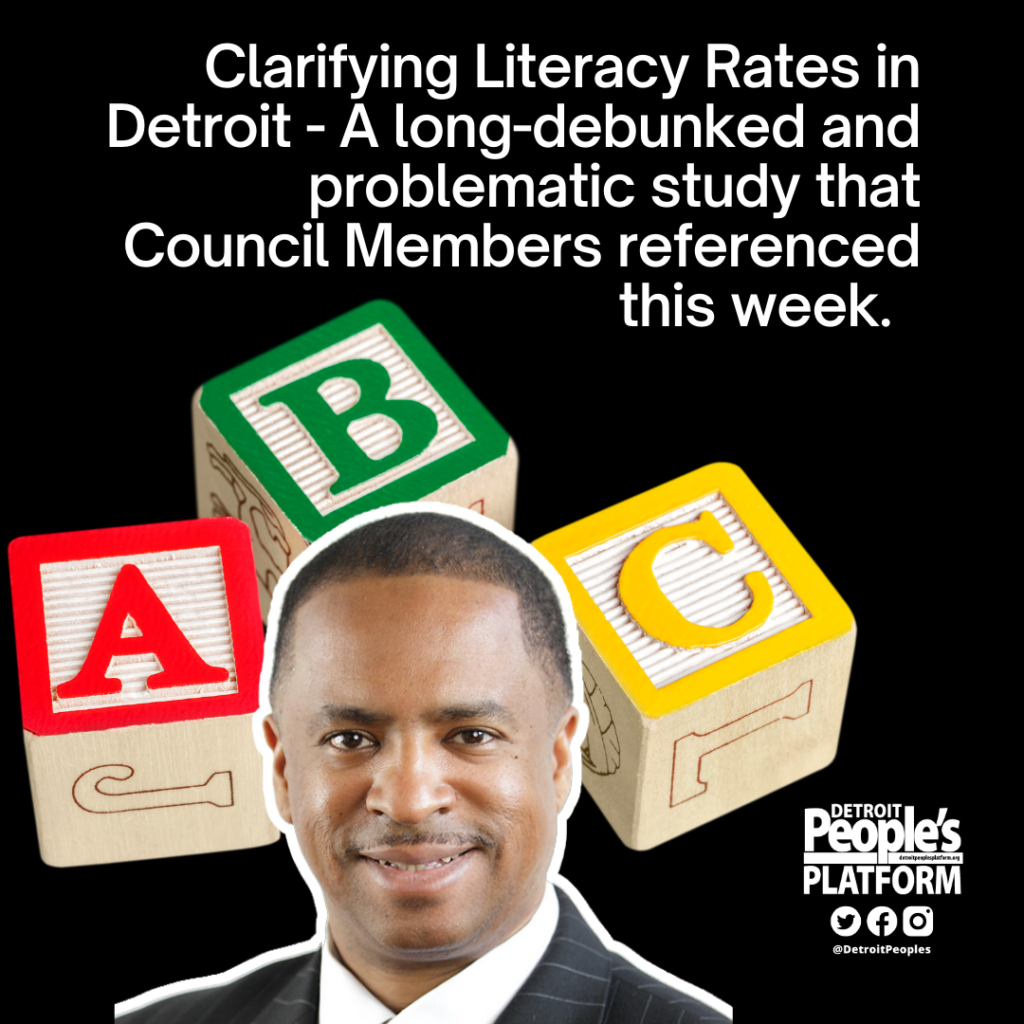 During this week's City Council discussion regarding the restaurant-grading ordinance, several members brought up an often-quoted but debunked study that referenced a nearly 50% illiteracy rate.

Simply stated, the statistic is incorrect and has been debunked by Data Driven Detroit. The fact that it continues to be used in arguments dealing with policy is concerning because of the potential for anti-Black/anti-neighborhood bias in city policies and perception of community - to inform Council decision-making. That is troubling.

All Detroit City Council members and their staff should read the brief article below explaining how there were errors in collecting such a statistic and even admit that today we don't have good literacy data.

Clarifying Literacy Rates in Detroit | Data Driven Detroit
A persistent datapoint in conversations about Detroit is that nearly ½ of Detroit residents are illiterate. We’ve addressed the problematic methodology of that datapoint before, but we often receive many questions about literacy in the city and Metro Detroit region through AskD3.
In the article, they stated the margin of error was a gargantuan 10%!  No one should refer to a statistic with so much error and lack of clear sample size.

"The literacy figure that people cite—47%—is from a single analysis conducted by the National Institute for Literacy in 1998 based on data collected in 1993, nearly 30 years ago. While this data is extremely outdated and doesn’t take into account changes in the landscape over the past 30 years, it was also not very reliable even when it was published." - Data Driven Detroit

The margin of error exceeding 10% of the estimate is cause for concern and exceeds our own internal mechanism for flagging estimates as potentially inaccurate. If you want to learn more about margins of error, check out this post (click post to read the article)." - Data Driven Detroit

It is the responsibility and duty of City Council to ensure that members have accurate information when deciding on city policy. It is time we put an end to this racist and erroneous notion that nearly 50% of Detroiters cannot read - it is FALSE, debunked, and doesn't help in any policy discussion or debate.