What is the City Charter?

The City Charter is like the U.S. Constitution but for our local city government. It serves as an organizing document and informs how the city is run. It is the law that mandates how the City works on a day-to-day basis.

The current City Charter went through a revision process between 2009 and 2012. The implementation of and adherence to this City Charter was interrupted by Emergency Management and Bankruptcy. Due to this, certain aspects of the Charter have only recently been put into place while other aspects have yet to be fully empowered.

The last revision of the City Charter supported the shift from an “at large” City Council to the current ‘Council by District’ system. It also provided a level of community power and oversight. The Board of Police Commissioners and its District-based structure being one example. There is also an Ethical Standards of Conduct, an Ethics Board and a process to remove corrupt officials was included.

In 2018 Detroiters voted ‘YES’ on Proposal R to revise the current charter in the primary election and voted for 9 Charter Revision Commissioners in the general election. Over the last two and a half years the Charter Revision Commission has engaged in a democratic revision process. They formed committees, hosted hundreds of meetings to engage with community and heard from over three hundred groups to build the revised City Charter.

What’s in the proposed Charter Revision?

Almost from the beginning there has been a campaign of misinformation and deception to dissuade Detroiters from supporting the revision. There has been opposition to Detroiters exercising their democratic right to draft revisions that reflect the contemporary needs and priorities of the nation’s largest majority Black city. The threat of fiscal ruin if the revised Charter is voted upon and passed by Detroiters is familiar to many activists and residents. These tactics, fear mongering and threats remind many of the push against the 2016 Community Benefit Agreement Ordinance, on the ballot as Proposal A. This was the progressive and community-led effort to hold private developers accountable when their private projects are subsidized by public incentives and huge tax breaks.

The effort to undermine Proposal A and the present People’s Charter are similar in intent; to deny majority Black Detroiters a real stake in the economic benefits of this city and to block a governance model that respects the democratic power of its residents. Instead, what Detroiters are asked to accept are the conditions that benefit the status quo. The white wealth creating and power building that is driven by powerful special interest and their collaborators.  Detroiters are confronted by the demand that we forego our right to cast a YES or NO vote on the proposed Charter revision. Now, those with power and influence have gone a step further by suppressing the vote of Detroiters. These power brokers and special interest groups want to decide on the Charter question for Detroiters. Their latest tactic is to fight to keep the Charter off the August 3rd primary ballot rather than let Detroiters exercise their democratic right to vote and cast their vote as they see fit.

At Detroit People’s Platform we await details on the next steps in the legal process. Nearly three years of resident engagement in a democratic process that reflects the legacy of progressive Detroit waits in the wings. Other than reporting ‘results’ that are actually not yet final, there has been silence from the media. There has also been silence from many of the current candidates who are seeking our votes in the upcoming elections.

These actions taken by the courts, by special interest and by anti-democratic forces can serve for Detroit voters as a rallying cry or as a whimper of defeat. In the weeks ahead, Detroit People’s Platform will be talking to our friends, family and neighbors about what democracy should look like in the nation’s largest majority Black city. We’re ready for the next round in this ongoing struggle. Join us! 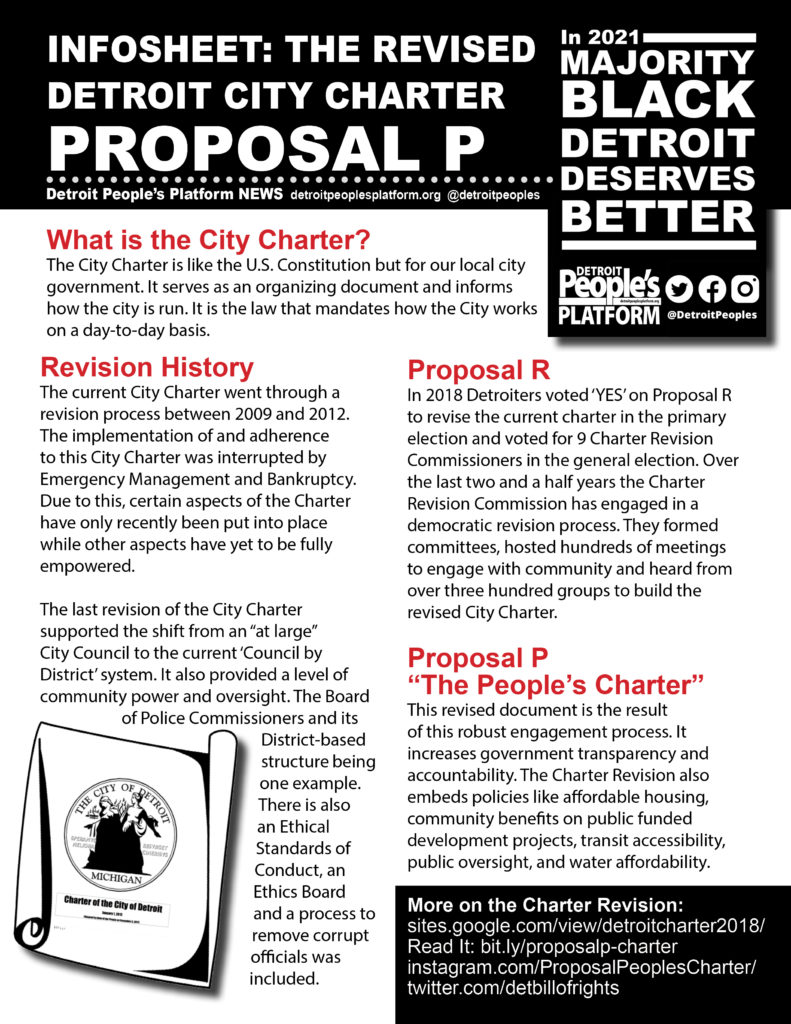 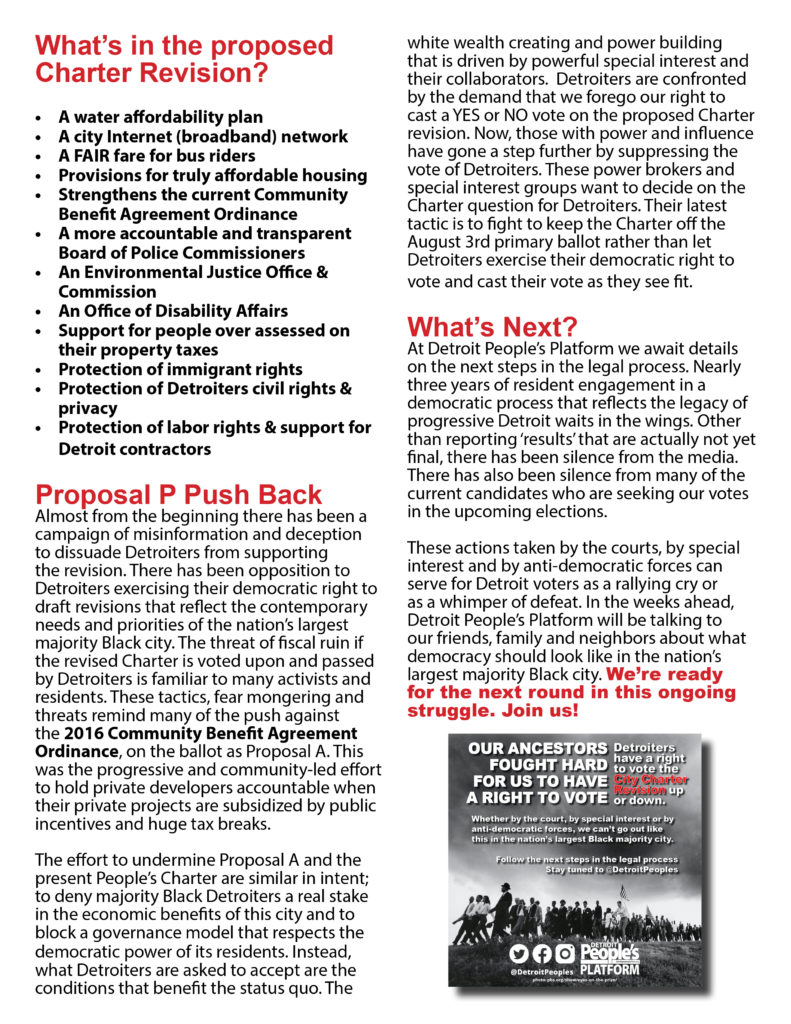