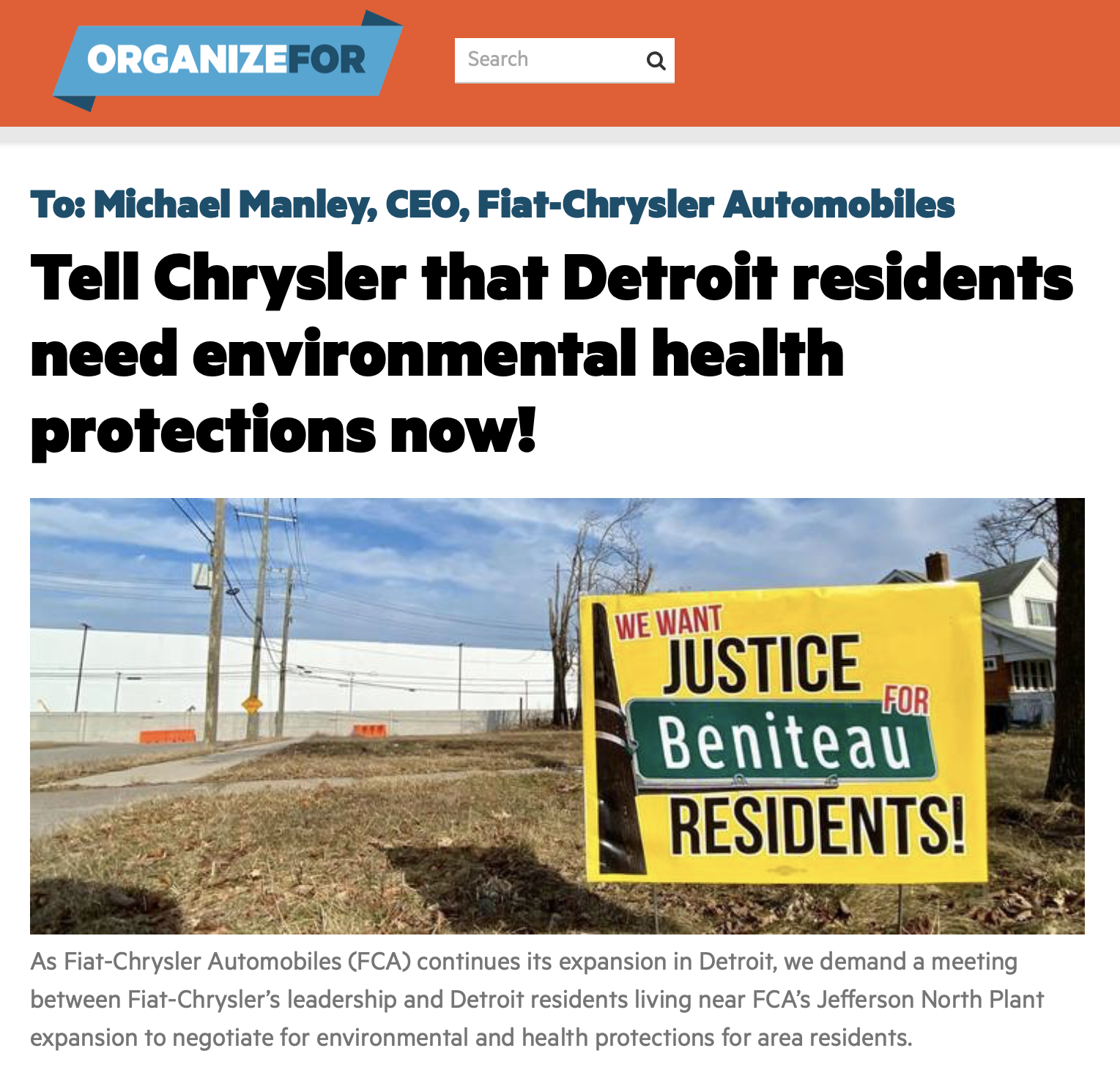 It’s happening again. Fiat-Chrysler Automobiles (FCA) is expanding in Detroit and has only agreed to commit $8.8 million in “community benefits” for a plant they are receiving a whopping $420 million in public tax abatements to expand. The worst part? This multi-billion-dollar company has failed to follow through on even the smallest commitments it has made thus far to the majority-Black community it claims to want to support. As part of the community benefits agreement it signed in April 2019 in order to receive the tax abatements, Chrysler agreed to renovate nearly 60 homes on Beniteau, the street closest to the project. Most of these homes are owned by Black, elderly, long-time residents. To date, they have renovated fewer than 5 of those houses. We must be clear about what this means. Not only does Chrysler think it’s acceptable to set aside less than 3% of the public funding it is receiving from the government for the benefit of the community, but it is refusing to be accountable to even the paltry promises its leadership has made to our people. Now, it is time for Chrysler to step up and work in cooperation with the people of Detroit to negotiate community protections that reflect the real health and environmental risks to Black Detroiters that Chrysler’s expansion has brought with it.

We’ve long known that pollution takes its greatest toll on the health of Black communities, who are often left with few resources or recourse. That has never felt clearer than in the middle of a global pandemic, as politicians, corporations, and the healthcare system alike continue to make decisions that mean that Black people are contracting and dying of COVID-19 at higher rates than almost every other group in the country. Chrysler’s leadership, which has managed to find a way to offset increased emissions in its suburban plant, but has failed to provide a clear plan for how it will handle the increase in emissions in a neighborhood that is majority Black, is no exception. A national study links long-term exposure to air pollution and COVID-19 mortality. In the U.S., Black children suffer disproportionately from asthma, and are seven to eight times more likely to die of asthma than white children. Communities of color face nearly 40% more exposure to toxic air pollution than white communities. From Louisiana’s ‘Cancer Alley’ to the recently discovered cancer cluster in Houston’s Fifth Ward, we know why mega-companies like Chrysler feel comfortable making decisions that place Black people in close proximity to pollution and other environmental hazards. Chrysler is counting on environmental racism to avoid taking responsibility for their actions. We can’t let them.

After George Floyd was murdered, Chrysler CEO, Michael Manley, sent an email to employees claiming that he “emphatically rejects the prejudice and hatred” Black Americans still face in this country. But the fact is, Chrysler bears a huge responsibility for the environmental violence, harm, and discrimination against Black people in Detroit, and is still actively profiting from that violence to this day. We deserve more than lip service from a company that has relied on us as both workers and funders for generations. We, the people, say NO to corporations and CEOs that claim Black lives matter in one breath while supporting our destruction in the next. Residents closest to the plant on Beniteau Street and others across the Eastside of the city, along with Detroit People's Platform have worked hard to bring these critical issues to the attention of local officials and Chrysler leadership with no success. Now, we need your voices to make sure Chrysler knows they must deal with the community in order to benefit from our public tax dollars. Sign our petition today and make sure Chrysler knows they must deal with the real Detroit if they want to keep building in our community.