December 5th, 2020 marks the 65th anniversary of the arrest of Rosa Louise Parks, who refused to give up her seat to a white man and move to the back of the bus. Mother Rosa Parks, as one of  many courageous Black women who were fined and arrested, sparked the Montgomery Bus Boycott, a movement that would last 381 days. The Black community mobilized in dangerous defiance of the Jim Crow power structure through a variety of tactics including direct action sit-ins and marches; walking and organized car pools for essential bus riders who had traditionally relied on the public bus as their primary means of transportation. This mass and collective protest was about the right to public access in various institutions and accommodations – including public transportation. Although not named at the time, the movement was rooted in racial justice and racial equity. 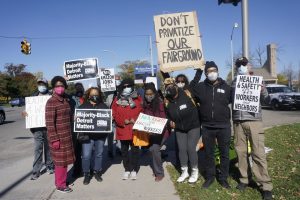 Transit Riders and supporters rally at the State Fairgrounds.

This set of coordinated actions eventually resulted in the passage of the Civil Rights Act of 1964, that includes Title VI – which forbids discrimination based on race, skin color, nationality, and origin, for all public transportation systems in the United States.

The Rev. Dr. Martin Luther King taught us that power is the ability to get something done and has two forms, “authority”(power over) and “power-with.”  Often we define authority as the only form of power, where authority asserts the right to demand certain actions or behaviors within systems or structures. However,” power with”  is the collective, mass power that is built by community through a set of actions or behaviors.

In response to the national racial justice uprising in protest of the murder of George Floyd, Breonna Taylor, Ahmaud Aubrey, Council President Pro Tempore, Mary Sheffield and Council Member and Raquel Castaneda-Lopez convened a table of community organizers, activists, researchers, leaders of various organizations and coalitions, including the Detroit People’s Platform Transit Justice Team to form the Racial Justice Task Force. Again, drawing on the history of movement building and the collective wisdom and lived experience of community members, the task force succeeded in drafting recommended revisions for the 2018 revised City Charter (the constitution for the city) that includes a Detroiter Bill of Rights.

The Detroit People’s Platform Transit Justice Team representing the interest of the 87% Black ridership in Detroit, led the advocacy for a Passenger Bill of Rights, Low-Income Bus Fare Program, and a new Transportation Advisory Commission – with input into the mandated 5-year Master Transit Plan and budget oversight of the Detroit Department of Transportation (DDOT), the Q-line, and the People Mover. Should our revised City Charter pass, it will codify the right to public transportation for all Detroiters including protections for individuals without income to have access to public transit. More importantly, the recommended revision prevents any merger, sale, or privatization of our public transportation system – without consent of Detroiters. This is a momentous win for essential bus riders and all Detroiters!

However, in 2021 Detroit’s essential bus riders continue to face civil rights challenges with the most recent example of the rushed privatization of the State Fairgrounds and the proposed relocation of the State Fairgrounds transit center. The Transit Justice Team and a coalition of over 25 individuals and organizations, such as Warrior’s on Wheels disability group, State Fairgrounds Development Coalition, Equitable Detroit Coalition, concerned community members and essential riders organized and fought for a Title VI public hearing on November 13th, 2020. After concerns were raised that DDOT bus riders and members of the disability community were denied their due process as defined in the 1964 Civil Rights law regarding public transit protections. Prior to the Transit Justice team and bus rider organizing effort, DDOT had failed to comply with Title VI stipulations and the concerns of bus riders were ignored.

Triggered by the city of Detroit’s proposed sale of the State Fairgrounds to the Hillwood / Sterling Development Group, the Transit Justice team led the call demanding for and WON that DDOT conduct a formal public hearing to receive input from bus riders on the impact of the proposed Amazon development on transit services. In addition, the Transit Justice team also demanded and WON that DDOT publish the Equity Analysis to determine if Black and people of color are more likely to experience disparate impact as a result of the transit center relocation.

At the time of this writing, the developer has begun to break ground for construction. In honor of the work that begun 65 years ago, the Detroit People’s Platform and the Transit Justice Team remain committed to the fight for transit justice in the nation’s largest majority black city.