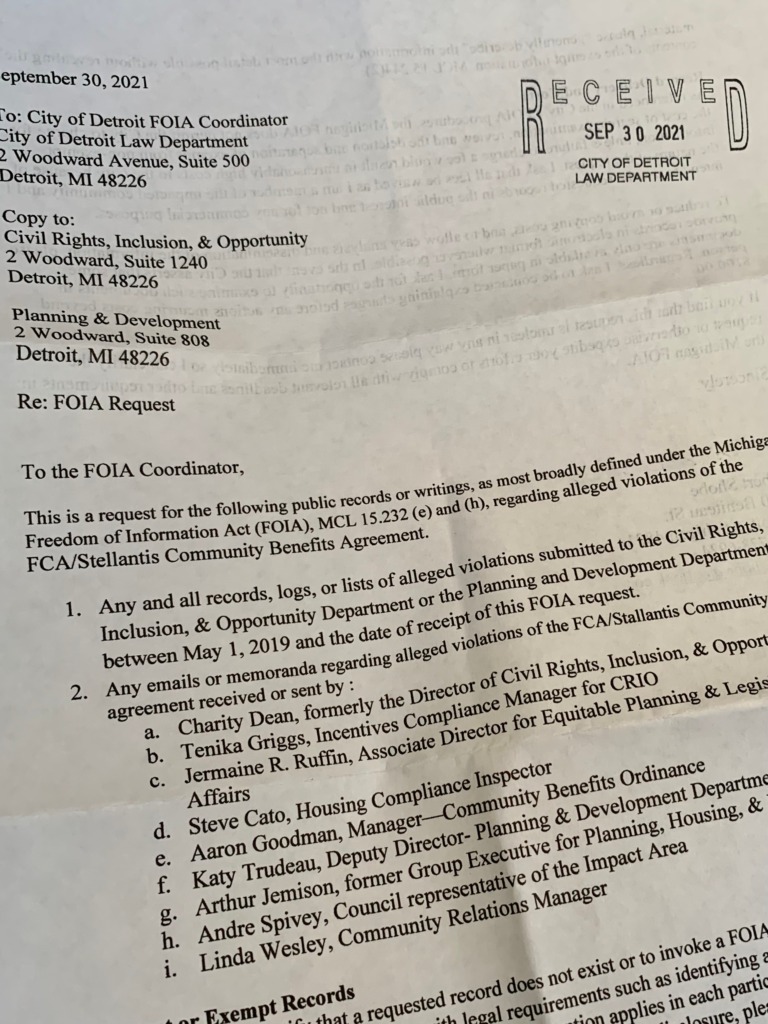 With corruption rampant at City Hall Detroiters living next to Stellantis’ Detroit Assembly Complex launch their own investigation and call for transparency and accountability.

Detroit – On Thursday, September 30th the Justice for Beniteau Resident group filed a Freedom of Information Act (FOIA) Request with the city of Detroit’s Law Department. Beniteau Street residents have been heavily impacted by the FCA/Stellantis expansion. Residents have been filing complaints about issues with the plant for over two years without their concerns being addressed. With no response forthcoming from the City, residents have decided to pursue another avenue to get at the truth about where the numerous complaints have landed and why the concerns have gone unanswered by local officials.

The FIOA requests information from the city’s Civil Rights, Inclusion and Opportunity Department that monitors compliance with the Community Benefits Agreement with FCA, now Stellantis. In early 2019, the large-scale, public funded project was announced and met the criterial for the city’s Community Benefits Ordinance (CBO).  The rushed process failed to include aspects of the deal like the massive land swaps and an analysis of the environmental impacts that ultimately would disrupt the quality of life for residents in the impact area.

Earlier, on Monday September 20, 2021, the Michigan Department of Environment, Great Lakes and Energy (EGLE) filed violation notices against Stellantis.  The violations come as a result of resident complaints about overwhelming odors. The new Jeep Grand Cherokee L went into production this summer and since the newly expanded plant has come online residents have reported an increase in odors and health issues.

“We are filing this FOIA request to make sure that, in addition to our complaints to EGLE being heard, that we are also heard by our elected officials at the city level,” Beniteau resident Robert Shobe, who filed the FOIA Request shared. “(Former Council Member) Spivey was supposed to represent us and our interest in this deal and now that he has resigned, we need to make sure that we are being heard and that the threats to our health and quality of life are being addressed.”

Mr. Shobe and other residents in the Justice for Beniteau group, the Detroit People’s Platform and other concerned Detroiters have been raising awareness about the need for further reduction in emissions from the Detroit Assembly Complex and the need for repairs that ensure that homes located near the facility are safe to live in.