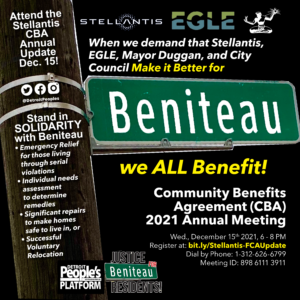 On Wednesday, December 15, 2021, The City of Detroit will host the annual update for the Stellantis/FCA Community Benefits Agreement.

The meeting will be filled with PROPAGANDA to cover up the stench of the project.

Propaganda is biased or misleading information used to promote or publicize a particular point of view. Again, this year, due to the pandemic, the update will be hosted virtually on zoom and will provide limited opportunity for critique of economic and environmental injustice. Residents have seen this movie before:

All of this political theater while residents next to the expansion are being forced to breathe and live through serial air quality violations and impacts on their quality of life.

This is a public funded project with Stellantis receiving over $400 million in tax incentives. Detroit People’s Platform and Equitable Detroit, the Citywide CBA Coalition (EDC), have been organizing and advocating for Community Benefits Agreements for large public funded projects for nearly a decade.

In 2016, EDC lifted the People’s Community Benefit Ordinance to the ballot. The grassroots People’s CBO (Proposal A) was overtaken by a dark money funded Developer-friendly CBO (Proposal P) at the polls. We represent the 80% of Detroiters in the IMPACT AREA who voted for Proposal A in the 2016 election.

CUT THROUGH THE PROPAGANDA! 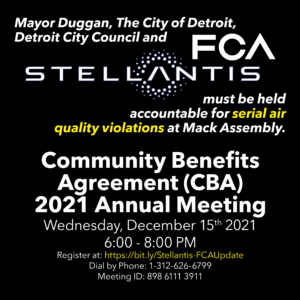 STAND IN SOLIDARITY WITH BENITEAU RESIDENTS!

THE FACILITY - Stellantis’ massive Detroit Assembly Complex, combining their Mack Ave. and Jefferson North assembly plants, was announced to the public in March of 2019 and is the first new assembly line(s) in Detroit in over 30 years.

THE COMPANY - Stellantis is a multinational automotive manufacturing corporation formed in 2021 by a merger between Fiat Chrysler Automobiles and the PSA Group. As of May 2021, Stellantis is the sixth-largest automaker worldwide and reported net profit of $7 billion for the first half of 2021.

PUBLIC FUNDING - Stellantis’ Detroit Assembly Complex has been approved for over $400 million in public funding, incentives, abatements and tax capture for 30 years.

COMMUNITY BENEFITS - The Community Benefits Agreement for the deal included $5.8 million for Workforce Education, $1.8 million for Housing, $1.1 million in an Impact Neighborhood Fund and $0.1 million for Construction Impacts; totaling only $8.8 million in community reinvestment from FCA/Stellantis. The city received over 700 applications for Phase 2 of the $15,000 home repair program with only 60 slots available.

EGLE - The Michigan Department of Environment, Great Lakes, and Energy (EGLE), formerly MDEQ, is the state department that focuses on environmental issues. They process air quality permits, regulation and enforcement. Since the project was announced in early 2019, EGLE has approved air quality permits without consideration of the proximity of the residents, the existing public health crisis, and the extreme poverty in the majority Black neighborhoods around the plant.

ENVIRONMENTAL RACISM - The Detroit Assembly Complex is in what the Environmental Protection Agency calls a “nonattainment area” for certain pollutants. Due to this FCA/Stellantis had to reduce emissions elsewhere to increase them here. Stellantis has increased emissions in this 94% Black community with extreme poverty and high asthma rates while reducing emissions at their plant in Warren.

PUBLIC HEALTH - The zip codes around the FCA/Stellantis ‘Impact Area’ have some of the highest Asthma hospitalization rates in the city and nearly 3 times the rates of the rest of the state of Michigan. The vulnerability of this community to COVID 19 has been increased by exposure to increased pollution.

FRONTLINE RESIDENTS - Beniteau residents, due to their homes’ proximity to the Mack Ave. Assembly paint plant, are uniquely impacted and overburdened with pollution. This majority Black, Frontline or Environmental Justice Community did not receive protections  before the violations occurred. and typically have to fight for their concerns to be heard and questions answered.

AIR QUALITY VIOLATION ORDERS - The Michigan Department of Environment, Great Lakes, and Energy (EGLE) have issued three air quality violations for Stellantis’ Mack Avenue plant. The first was issued on September 20, 2021, the second on October 14, 2021 and the third on November 3, 2021.

When we demand that Stellantis, EGLE, Mayor Duggan, and City Council Make it Better for Beniteau we ALL Benefit! Attend the Stellantis CBA Annual Update Dec. 15! and Stand in SOLIDARITY with these current

We stand with Beniteau Residents in demanding Mayor Duggan, the City of Detroit, Detroit City Council, EGLE and Stellantis take responsibility for their role in this injustice, take action to correct course through assessment, and implement home repairs and voluntary relocation as remedies.

Call to Action!
Attend the FCA/Stellantis/City of Detroit