From the Detroit MetroTimes 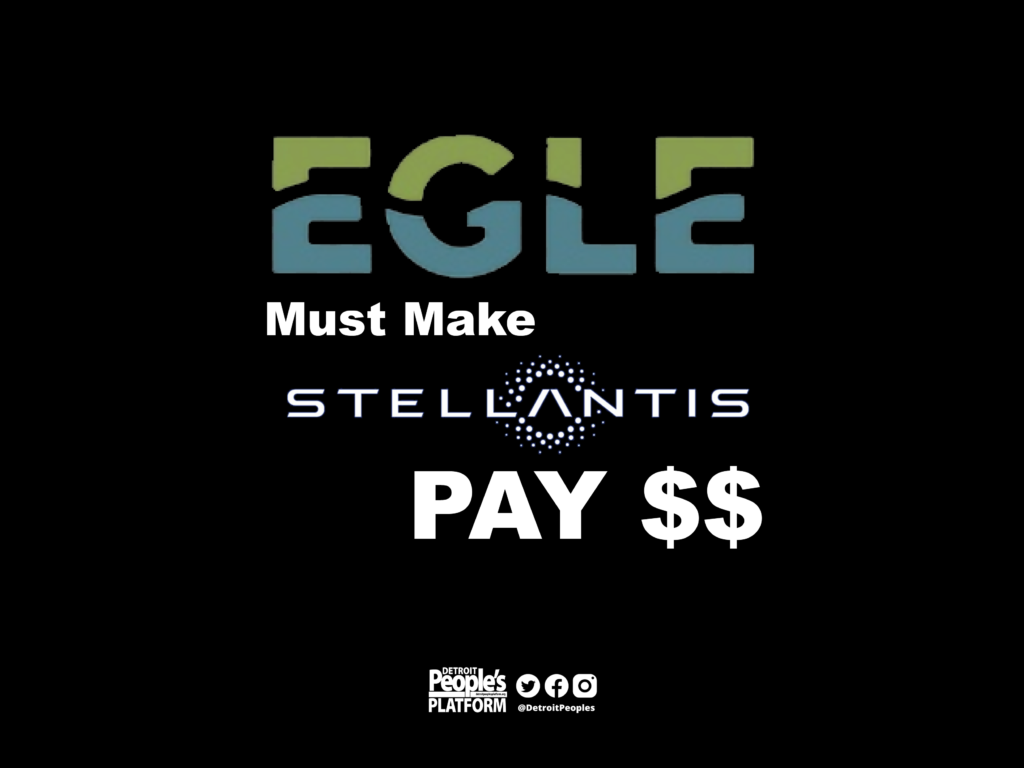 On Thursday January 27, 2022 at 6pm the Michigan Department of Environment, Great Lakes and Energy (EGLE) will host a Community Update Meeting on Stellantis’ Detroit Assembly Complex. According to the announcement the meeting will discuss EGLE inspections, compliance, and information on air sampling activities from both the Michigan Dept. of Health and Human Services (DHHS) and the US Environmental Protection Agency (EPA).

Part of Stellantis response to EGLE’s violation orders and inspections has been to repeatedly claim that there are no health impacts from plant operations. During a recent meeting Al Johnston with Stellantis' corporate environmental program claimed that “The odor issue at the site, which we’re working to address, is not a health risk, and this is what we’ve determined through modeling that we’ve done.” The odor is not a health risk, but what causes the odor may be.

In the analysis shared thus far shows no data on suspended particulates. They focus on odor as the only symptom of air pollution. However, in addition to the strong odor residents have reported headaches, burning eyes and throats. Their experience directly contradicts this dismissal that is based on models rather than actual data. There are many questions. What about suspended particulates? Did the ‘evacuated lung sampler’ have particulates? The issue is more than odor.

There is concern that EGLE and DHHD have allowed Stellantis to repeatedly make these health statements. The monitoring data and analysis cited by Stellantis are insufficient to do so and points to a recurring problem; one cited by community and environmental activist repeatedly. The Michigan departments charged with protecting the health and environment where residents live; instead appear to be protecting the perpetrators of environmental racism and over pollution.

The neighborhoods around the Stellantis project are 94% Black and experience high rates of poverty. Over seven years, EGLE (formerly MEDQ) has only denied 11 permit requests. The data shows that in areas with permit approvals there are more respiratory racial health disparities than in areas without permit approvals.

The cost of the Stellantis expansion is being offset with over $400 million in public funds and was part of a local Community Benefit Agreement process here in the city of Detroit. Since the project was announced residents have asked questions and expressed concern about the impact of the plant on their health and quality of life.

Residents on Beniteau, who live closest to the plant, engaged throughout the city’s Community Benefits process and raised concerns that went unanswered. Throughout the process residents were asked to prioritize jobs. Three years later, following a strong organizing and public pressure campaign waged principally by Beniteau residents, their concerns are being acknowledged. EGLE should have listened to residents first and must prioritize residents most impacted moving forward.

A recent letter to EGLE from elected officials noted that EGLE was aware of a high level of preexisting respiratory conditions in the area before granting permits to the company. However, EGLE considers air quality permits in a vacuum and by doing renders invisible those residents most likely to be negatively impacted by the permitting process. EGLE’s website reads; “Some issues EGLE cannot consider include popularity of the action, emission sources that are not part of the action, indoor air pollution, traffic, hours of operation, noises and lighting, and zoning issues.”

This is where EGLEs inherent race-problem perpetuates itself. How is it possible for state regulators to protect frontline communities that they can’t see or hear?  In the case of the Stellantis plant expansion EGLE can’t consider the national study linking long-term exposure to air pollution and COVID-19 mortality. They can’t consider that in the U.S., Black children suffer disproportionately from asthma, and are seven to eight times more likely to die of asthma than white children. The fact that communities of color face nearly 40% more exposure to toxic air pollution than white communities is not just lost on EGLE, it simply cannot be heard. The parameters they have established to make their decisions also become the justification for the injustice.

The new Jeep Grand Cherokee L went into production last summer and residents reported an increase in odors and health issues. EGLE has issued multiple violations that stem from resident complaints. Jeeps continue to roll off the line and as recently as last week residents continue to call in with complaints. Even though the assembly plant could shut down the offending portion of the operations, it has elected not to do so. These policy biases in approval of permits amount to systemic racism and choosing business profit over people’s health & well-being. This is not an isolated moment, this is recuring in frontline communities across the state.

DHHS and EGLE must relinquish its history of discriminatory treatment of (Black Indigenous People of Color) communities. EGLE and DHHS must bring forward more equitable and just policies in their response. It is time the DHHS and EGLE apply a health equity and environmental justice lens to their work.

EGLE should consider the following recommendations to address the injustices that are inherent in the permitting process and specifically to the situation at the Stellantis Detroit Assembly Complex:

On November 8, 2021, a group of Beniteau residents filed a Title VI Civil Rights complaint against EGLE with the United Sates Environmental Protection Agency (EPA). The complaint focuses on the racial disparities in the state's permitting process and details the impact of EGLE’s decisions on the residents who live closest to the Stellantis plant. “When my eyes start to burn, I start to become more afraid of all the things I can’t smell than those that I can” one neighbor shares in the complaint.

Another neighbor on Beniteau shares "The migraine headaches, and the burning in the eyes, and tightness in my chest... I just know when I’m out too long, I get that way, but I can’t say today is going to be worse than tomorrow. I know yesterday it was just too much. I was crying."

The Title VI complaint states that: “[t]he decisions by Michigan's Department of Environment, Great Lakes, and Energy (EGLE) allowing Stellantis to significantly expand its facilities continues the discriminatory legacy of requiring communities of color to bear the disproportionate burden of the industrial pollution generated by all of society. Unfortunately, the Stellantis Complex (“Facility”) does not exist in isolation.” The federal complaint documenting the experiences of residents living closest to the plant, contradicts the no health impacts claims offered by Stellantis.

Beniteau residents have signed-on to the following post-violation demands targeting Stellantis, EGLE and the City of Detroit:

Detroit is the nation’s largest majority Black city. Here we see violence against Black bodies, families and communities show up every day in public policy and decisions made by those in power. In the case of the Stellantis Detroit Assembly Complex project the violations and the subsequent issues uncovered in the investigation process will not be adequately responded to by EGLE, DHHS, the City of Detroit or Stellantis until the racial injustices embedded in government and corporate systems and structures are acknowledged and eliminated.

The Stellantis (FCA) Detroit Assembly Complex is located on the City’s eastside and houses two large plants, Mack Assembly and Jefferson North. In recent months, the Complex has received three (3) violation notices from Michigan’s Department of Environment, Great Lakes, and Energy (EGLE). Two (2) of these violations were due to paint and solvent odors impacting nearby neighborhoods. In another, issued in October, EGLE found Stellantis to be ducting Volatile Organic Compound (VOC) emissions directly into the environment without any treatment. Treatment of these emissions was a mandatory condition of their air permit. The violations went undetected as the plant operated for eight (8) months. EGLE allowed the plant to continue operating in violation of the permit even after the violation was issued until Stellantis corrected the issue in December.

The Stellantis (FCA) Detroit Assembly Complex is located on the City’s eastside and houses two large plants, Mack Assembly and Jefferson North. In recent months, the Complex has received three (3) violation notices from Michigan’s Department of Environment, Great Lakes, and Energy (EGLE). Two (2) of these violations were due to paint and solvent odors impacting nearby neighborhoods. In another, issued in October, EGLE found Stellantis to be ducting Volatile Organic Compound (VOC) emissions directly into the environment without any treatment. Treatment of these emissions was a mandatory condition of their air permit. The violations went undetected as the plant operated for eight (8) months. EGLE allowed the plant to continue operating in violation of the permit even after the violation was issued until Stellantis corrected the issue in December.