Detroit People’s Platform would like to thank all of the residents and supporters who took the time to join this Fiat Chrysler CBA Update. We also want to recognize and thank those who flooded the chat with important questions and righteous critique, and everyone who made public comment.

On Monday Dec. 7th, the city of Detroit hosted the Fiat Chrysler (FCA) Community Benefits Agreement (CBA) Annual Update. The meeting was well attended and many of the issues with the project were brought into the discussion.

Participation in the meeting peaked at 175 with over 100 of those staying until the end. The meeting included presentations (view and download) from the city on FCA's compliance with the CBA, from FCA on their progress and back-patting, and questions from the Neighborhood Advisory Council (NAC). Public comments and questions from the chat, video attendees and callers were taken afterward. The meeting is available to view here.

U.S. Congresswoman Rashida Tlaib and Michigan Senator Stephanie Chang attended and directly questioned both the administration and FCA. City Council Member Andre Spivey and his staff were absent until the fact was brought up in the chat. His staff logged on as did the council member, who was out of town.

The performance of the majority of the Neighborhood Advisory Council was negligible. Earlier in the day Detroit People’s Platform and Equitable Detroit Coalition sent an open letter to all 9 NAC members through the chair. The letter included a moral call for the NAC to demand a renegotiated or revised Community Benefits Agreement. While we recognize that the three Black women on the NAC made righteous remarks and spoke to injustice, the demand for a new CBA was not made. By our count the NAC members asked too few questions and failed to out FCA and hold Ron Stallworth’s feet to the fire.

Jobs in Question
One of the most heated exchanges in the meeting was around accuracy in the jobs numbers. Congresswoman Tlaib pushed on the issue and the claim that their were 5000 NEW jobs. While FCA Community Liaison and Detroit Economic Growth Corporation Member, Ronald Stallworth repeated the company line on the hiring process and the numbers replicated in local media repeatedly. Harvey Hawkins, Chrysler/UAW, joined the meeting and confirmed that there are contract requirements between FCA and the UAW that will influence the number of NEW jobs and Detroiters hired. He also brought forward the issue that many Detroit hires are being placed throughout the region at lower wages, when they expect to be hired on at full wages at the local plant.

Our conclusion remains that the 5,000 NEW jobs are still in question. It is a disingenuous cover-up to focus on the promise of future jobs rather than the present injustice that residents living on Beniteau and the impact area are dealing with everyday.

Environmental Racism
The meeting's chat was very active with residents, neighbors from around Southeast Michigan, some elected officials and environmental justice advocates posing pertinent questions. The Environmental Racism inherent in the project was pushed repeatedly. Congresswoman Tlaib and residents demanded confirmation that FCA reduced emissions in Warren to increase them in the backyards of Detroiters, in a neighborhood that is 94% Black.

Another pertinent environmental issues raised repeatedly but not addressed was the need for FCA to begin monitoring BEFORE the plant goes online. This will provide the opportunity to compare data.

Neither of these issues were addressed clearly by Fiat Chrysler.

This is how Environmental Racism works; perpetrators ignore the health and psychological damage to Black residents and hide behind the call for data ignoring the scientific reasoning as to why you monitor and collect base line data. Will someone please tell Ron Stallworth that by the time the data emerges it is often too late to prevent the damage to Black bodies.

Home Repair Issues
Some residents in the project Impact Area will be able to access funding for contracted home repair. Residents on Beniteau St., which is the most adjacent residential street to the plant, have been given priority for this program. The problem, which has been repeated by community members since day one, is that $15,000 per house is not enough to make these homes safe to live in.

Beniteau Resident Robert Shobe stated that "$15,000 is not enough to take care of what is going on around us" citing both pollution and damage to property from construction. "...I guarantee you wouldn't live behind this place and you wouldn't want it to just pop up behind you." Hear more from Robert and other residents on Beniteau.

The issue of home repair was brought up repeatedly in the meeting until one of the NAC members brought up the need for more funding for residents. Without hesitation Arthur Jemison, Group Executive for Housing, Planning and Development agreed with her and to set up a meeting to discuss. We are hesitant but know that with strong organzing and greater pressure the money these Detroiters need to make their homes safe to live in will be found.

When we organize we win!
Administration representative, Arthur Jemison, agreed on the record that there is a problem with the housing funding and agreed to meet with the NAC to revisit the issue of the $15k for home repairs. - Beniteau Residents have been organizing around this for nearly two years and we want to thank them for their leadership and recognize their endurance in this struggle through a global pandemic.

We need the Neighborhood Advisory Council to step up and demand the administration follow through with additional home repair funding for Beniteau and impact area residents.

While these Annual CBA Updates are one of the few ways for residents to question developers, like Chrysler, they seem reduced to a check on the box, a face to face moment with impacted residents to withstand rather than truly engage in. We will continue to stand with residents who challenge Fiat Chrysler, the administration and city council for a new FCA CBA. See you in 2021 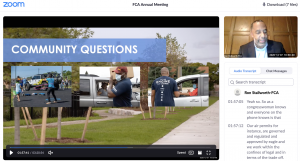