What is the DDA 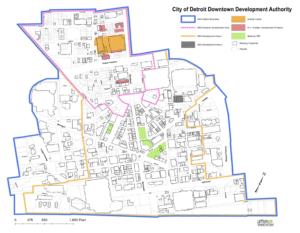 What is the DDA?

From the Detroit People's Platform NEWS 22

The Downtown Development Authority (DDA) was adopted in 1976 by City Council ordinance. Empowered by state law, downtown development authorities have broad powers to carry out the mission of development. City Council found that enacting the DDA was justified “to halt property value deterioration in the downtown business district, to eliminate the causes of such deterioration, and to promote economic growth in the downtown business district.”

Detroit DDA activity is funded by using public money in a variety of ways: tax abatements, tax increment financing (TIF), and TIF-based bonds and loans, to name a few. Between 1976 and 2017, according to its own estimates, the DDA directed over $5 billion toward the designated 7.2 square miles of downtown Detroit. Of that $5 billion, nearly $1 billion ($850 million) was in just TIF funds. Overall, 37% of downtown development since 1976 was funded using public money.

The DDA works by using public tax dollars either as a direct benefit to developers or as a base to draw in additional dollars (i.e. through TIF-based bond financing). With a few exceptions, most of the projects in the downtown area are run by private companies. Rather than being disbursed to the rest of the city, prosperity from economic development largely stays in the downtown core. Profits either go to private developers or are recycled through the DDA to be used on future projects. According to the TIF plan, the downtown core is to serve as an economic anchor and will spur development in the rest of the city; however, the reality exposes the untruth in that vain hope. Though the DDA is based in state law, it is remarkably lacking in transparency in its business operations, particularly given the incredible amounts of public money that it moves around. For example, it was not until in 2018, when required by a new state law, that the DDA published the TIF plan that steers its development and outlines estimates of spending. Other parts of ordinary business remain unclear, such as how exactly proposed developments are determined to be worth the investment.

Its important to note at this point that the TIF plan published by the DDA is dated 2017. This is important for a couple reasons: (1) this is the year that Detroit became a majority renter city;  (2) many of the current community interest items, such as increased funding for the Hudson project and an additional $200 million reward for development for the Little Caesar Arena project, had not yet come to pass; and (3) the COVID-19 pandemic (and all its ripple effects) had yet to happen.

At the time when the DDA was established, Detroit was experiencing massive white flight to the suburbs. Remarkably, the TIF plan does not once mention “Black,” “white,” or “white flight.” It seems that rather than addressing the root cause of disinvestment via racism, the DDA has chosen to address only the effects. The “if you build it, they will come” mentality has resulted in an outsized amount of development in just 5% of Detroit’s land. Most of the downtown core is now developed, while the rest of Detroit still waits for its due.

BIG Questions for the DDA

How much money has the DDA captured?

If there is a balance, what is it?

Is some of that money used to pay debt?

How does the money flow?

Could DDA funds be used to offset costs of projects like Hudson’s instead of using tax incentives?

Has the DDA fulfilled its mission of revitalizing Downtown?

Please Note: We cannot vouch for the accuracy of this information. It was taken directly from the DEGC website
as of the printing of this issue. 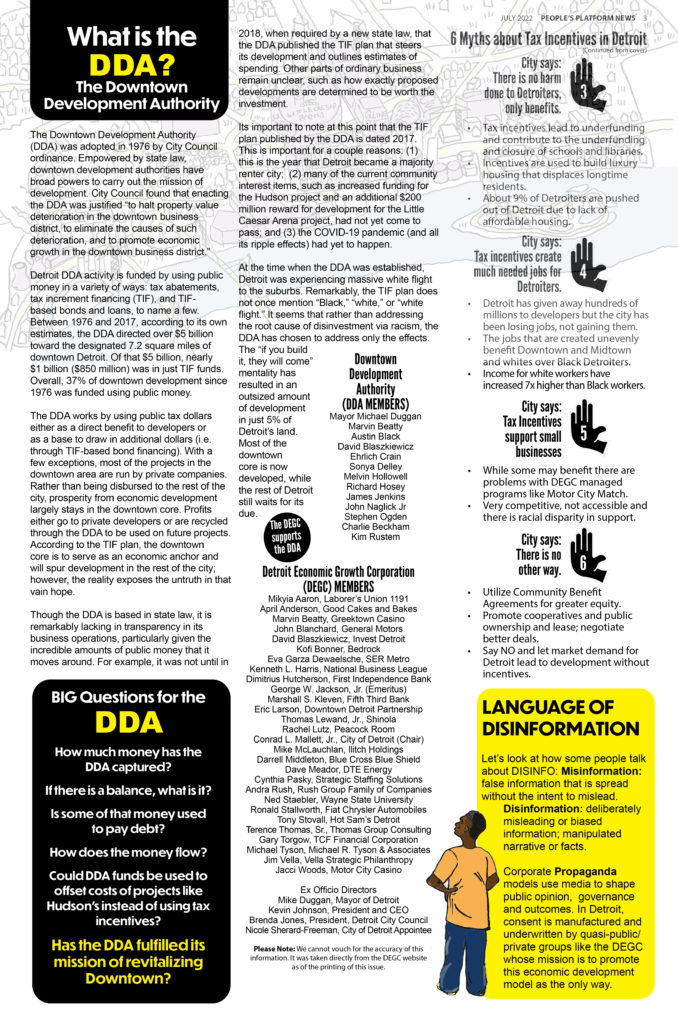