In May of 2022, Detroit City Council unanimously approved the Right to Counsel (RTC) ordinance. The ordinance, which provides legal representation to low-income tenants facing eviction, has also been passed in over 15 other US cities and a handful of states. Without a right to counsel, experience shows that it is likely that roughly 3% of Detroit tenants are able to find legal representation in housing court compared to around 85% of landlords.

Detroit’s Right to Counsel is urgently needed and has potential to create lifechanging results for many Detroiters. COVID-era programs, such as CERA rental assistance and the eviction moratorium, have ended. However, Detroit’s eviction problem was approaching crisis levels before the pandemic hit.

Despite City Council’s unanimous approval of the ordinance, the mayoral administration has been slow to rollout the program and provide adequate funding. According to the ordinance passed by Council, the Right to Counsel program was to have been functioning as of October 1, 2022. Most recent press coverage cites a January 1, 2023 start date- three months later than the intended start date. In addition, the program is currently grossly underfunded.

The Stout Firm, which has done financial analyses of Right to Counsel impacts in other US cities, published a study estimating that the Detroit program requires around $17 million a year to provide adequate legal representation to all qualified tenants in Detroit facing eviction. The administration has budgeted a mere $6 million of ARPA funding- over the course of the first three years of the program which translates into $2million annual funding.

Right to Counsel programs have been shown to provide a greater financial return on investment, promote neighborhood stability, and reduce displacement from rapidly changing neighborhoods with escalating rents.  The administration’s failure to quickly rollout and adequately fund the Detroit Right to Counsel fails to recognize the urgency of the moment where thousands of Detroiters including women with children face the life altering act of eviction. 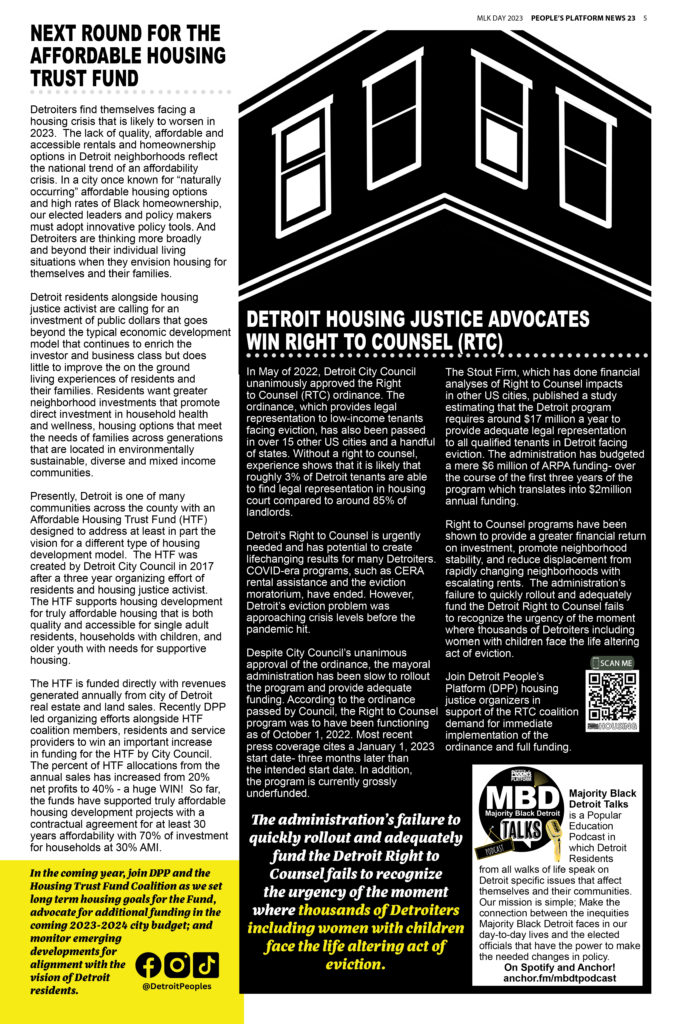